C is for…
Cockney Rejects

Formed in the late seventies on the back of the UK punk explosion and fusing pride in their East End upbringing, West Ham United Football Club and a furious blend of bootboy punk and primitive heavy metal savagery, Cockney Rejects were a sort of blueprint for the crossover brand of metal and punk that flourished in the mid eighties, especially, strangely enough for such a parochial band, in the US.

The mainstays of the band, vocalist Jeff and guitarist Micky Geggus (brothers, though Jeff is more widely known by the monicker Jefferson ‘Stinky’ Turner) were joined by bassist Vince Riordan and drummer Andy Scott in 1979 to create the ‘classic’ CR lineup and soon signed to EMI, where they unleashed a string of minor hits such as The Greatest Cockney Ripoff and I’m Forever Blowing Bubbles, their punked-up version of the West Ham Supporters’ terrace anthem. However a mixture of football hooliganism and constant struggles with right wing extremists saw the band move away from the Oi! Movement (a movement they’d unwittingly spawned with their iconic track Oi! Oi! Oi!), deciding instead in an abrupt change of direction which saw them heading to into bluesy hard rock territory.

The Wild Ones and Quiet Storm were viewed with suspicion as the work of money-hungry bandwagon jumpers by long-haired rock fans (despite the fact the band had often included in their sets – and even recorded the song Motörhead), though The Wild Ones especially was a not half-bad stab at raw-edged Aerosmithery; This was still an age when punk and metal were uncomfortable bedfellows, remember – but the band failed to survive shedding most of their core fanbase with the shift in musical direction and after a third hard rock album, Lethal, in 1990 they quietly bowed out until the inevitable twenty first century reformation which saw them re-embracing their skinhead following and heading back to punkier climes. – Scott Adams

C is also for … Coney Hatch 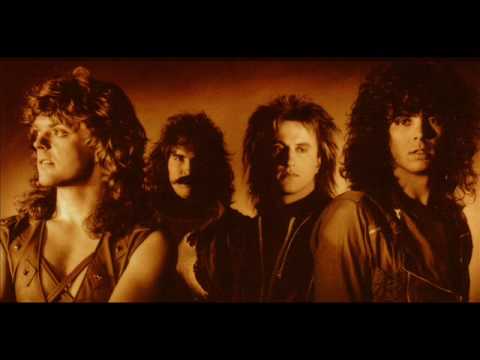 Canadians Coney Hatch… so close but yet so far. On the face of it, the explosive combination of Steve Shelski’s razor-sharp guitar playing and Carl Dixon’s just-the-right-side-of-the-brillo-pad vocal attack should have made them world beaters but somehow, despite major label support and a hell of a lot of touring the band failed to crack it.

Their first, self titled album, released in 1982, is probably the purist’s fave, produced by madcap Canadian rock legend Kim Mitchell and full or barnstorming hard rock like Devil’s Deck and Hey Operator (later covered by none other than Aldo Nova), whilst second album, the Max Norman-produced Outta Hand is generally considered a bit of a dud, mainly because of Norman’s unsympathetic production – however tracks like Don’t Say Make Me did carry on the flame from the first album, melding chunky riffage and impassioned, big choruses in tidy fashion. However it’s 1985’s Friction that for me is the jewel in the band’s disappointingly small crown. A fabulous mix of mid-eighties US metal (He’s a Champion could easily have been recorded by someone like Malice or Warrior), and smooth, tear-jerking AOR finery (She’s Gone is absolutely the best rock ballad of the eighties that was not a massive hit) as well as pop fripperies like The Girl From Last Night’s Dream, on the face of it this album should have turned the ‘Hatch from perennial support artists to stadium-bestriding colossi… but it didn’t. Such was the competitive nature of this kind of music in the mid eighties. Many were called, but depressingly few were chosen. Of course the band was re-activated by the release of a new album, 2013’s Four, but frankly the spark had gone and it didn’t come close to recreating the band’s small-scale glory years. – Gavin Strickmann

C is also for… Coroner Swiss thrash metal band Coroner were one of those bands that probably suffered from being just a little ahead of their time, paving the way for others not quite so accomplished to reap the rewards of their hard graft and pathfinding abilities.

First album R.I.P. surfaced in 1987 on Germany’s Noise label and is a fine, frill-free mixture of technical thrash and bassist Ron Royce’s proto death metal vocals. Drummer Marquis Marky is prominent throughout thanks to the excellent production of Noise’s in-house producer Harris Johns; When Angels Die sounds like a slicker version of compatriots Celtic Frost, and indeed Tom Warrior’s band are a pretty good comparison at this point. However the bands diverged from this point, Celtic Frost heading ever further into avant garde territory whilst Coroner’s second album, Punishment for Decadence, saw them getting even heavier and more technical.

PfD was let down by a slightly tinny production from sometime- Motörhead production cohort Guy Bidmead, though there’s no denying the sheer heaviness of tracks like Masked Jackyll; So perhaps the most definitive Coroner of the eighties was 1989’s No More Color, produced by the man behind Saxon’s Wheels of Steel album, Pete Hinton. Dense, intricate and at the time quite difficult to listen to, this album put Coroner squarely at the front and centre as progenitors of the genre that would become extreme progressive metal. Listening back now however one feels that the band were on the edge of something that they didn’t quite grasp fully, and the nineties saw the band disappointingly fail to hold on to the gains made by their three eighties albums. – Graham Goodge