C is for… Crossfire Belgians Crossfire – though now sounding very much of their time to the modern listener– were a pretty heavy proposition on the Euro metal circuit when their debut album, See You in Hell, emerged in 1984. Hampered by being signed to compatriot label Mausoleum, whose well-meaning but bungling inefficiency, though par for the course for the time, still largely managed to do for the band, their first album is a fast and furious summation of what heavy metal (in its NWoBHM-inspired form) was mutating into in 1984.

Not quite relentless enough for the thrash tag yet still possessing a certain amount of double kick-propelled oomph (drummer Peter de Wint puts in a sterling performance behind the kit, unhampered by his dual role as the singer), songs like Magnificent Night certainly got necks moving on the European mainland, if nowhere else. The band even managed to completely rip off Judas Priest’s Genocide on the awkward (though irrefutably metal) Killing a Cop without too much fuss being made, and, in some small form positioned themselves as true contenders for European metal’s second division crown.

The band’s second album, cleverly entitled Second Attack went all-in for the now-established speed/thrash title and, it has to be said, still sounds pretty exciting (in parts) today. Singer de Wint wisely decided that drumming too at the newly established higher velocities being toyed with would probably do him a mischief, so Chris de Brauwer was recruited with satisfying results. Tracks like Feeling Down resembled UK hopefuls like Hellanbach and Battleaxe, but in reality wiped the floor with both, and after a couple of relistens to these long-lost gems you find yourself wondering why the band didn’t make bigger strides on the Euro mainland when bands like Grave Digger – who at this point in time were roughly on a level footing with Crossfire – have managed to make a career out of their denim and leather obsession. Well worth a listen if you still maintain a battle jacket.

C is also for… Cutty Sark On Mausloeum at the same time as Crossfire, and mining a similar seam of trad metal mayhem were Germany’s Cutty Sark. Almost certainly named for the brand of whisky of the same name rather than the august old tea clipper that still sits in dry dock at Greenwich, Cutty Sark are another of the seemingly nameless, countless legions of bands that emerged at this time with their eye on the trad metal prize.

Not as outwardly heavy as Crossfire, Cutty Sark had their unhinged, pedal to the metal moments – during which the wailing vocals of Conny Schmitt became a dead ringer for a mogadonned John Gallagher of Raven – but were also capable of more nuanced madness; The title track on their debut is a slow burning, creepy chugger that sounds like a cross between Accept and Mercyful Fate (and actually wouldn’t sound out of place on a Ghost album in 2017), betraying a classiness in approach and execution that somehow went unnoticed at the time of release.

This, of course, was a fate that befell many European bands at the time, with the big names of the the UK and US metal press content to nurture their own (often inferior) home-grown favourites, but it didn’t stop the band releasing a quick-fire follow up in the shape of 1985’s Heroes. Opening up with the quasi-thrash of Firebird, which again brought Raven to mind but added a bit of a Judas Priest sheen to the mix, Heroes was the work of a band that had found it’s niche and looked set for good things, despite a truly awful cover featuring a cap-sleeved rivethead in Excalibur-style quandry; However the band’s predilection for boogie workouts (have a listen to Do Come True) probably took the shine off of their otherwise assured metal assault, and the band’s dreams crumbled to nothing. Three quarters of the band reformed in 1998 for a final stab at glory but by then the trad metal horse had bolted and the band split again shortly afterwards.

D is for… Dark Wizard 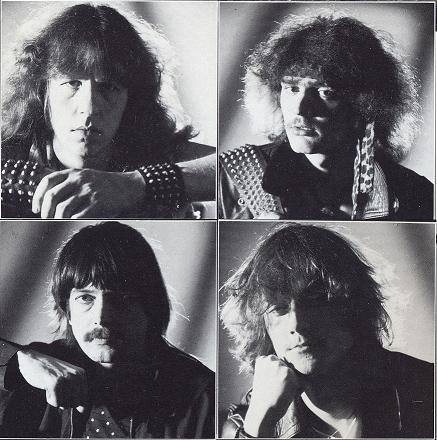 Also releasing material on Mausoleum in the years 1984 and 85 – the Mausoleum A&R department were certainly on their toes at the time – were Dutch metal juggernaut Dark Wizard.
Led from the front by the snarling caterwaul of Berto van Veen, a man who absorbed wholesale Udo Dirkschneider’s schtick and yet somehow retained his own identity, DW too adopted the Mausoleum blueprint – fast, NWoBHM-informed metal verging on thrash at times yet always retaining the melodic sensibility of bands like Accept – releasing an EP (Devil’s Victim) in 1984 and a solitary full-lengther – Reign of Evil – a year later. The EP is the superior of the two releases, with the band somehow adopting a freer attitude that led to freewheeling metal jollies like the title track and the excellent Big Typhoon. Reign of Evil sounds a bit like a band trying too hard for ‘classic’ status – Evil Spirits wants to be a Di’Anno– era Maiden epic but, excellent Dave Murray heroics on the solo aside, just ends up sounding tedious and a bit too try-hard for comfort.

If you’re interested in exploring Dark Wizard some more- and if you love metal from this era it’s certainly worth it – Eat Metal Records put out a compilation album – Early Spells – last year featuring fifteen Dark Wizard tracks. The production run was limited to 500, so you might take a while digging it out, but there’s enough of interest – especially in the band’s early material – to warrant a bit of effort.