A is for… Air Raid
Not to be confused with the Swedish heavy rockers of the same name who released a passable album, Point of Impact, a couple of years ago, this Air Raid were an American pomp rock band who peddled a neat line in hopelessly overblown hard rock. Borrowing heavily from Queen and Styx (natch), it’s a mystery why their 1981 album – eponymously titled, of course, and produced by knob-twiddling giant Eddie Kramer (Kiss, Angel, Whitesnake etc etc), went unnoticed.

Keyboarding singer Arthur Offen is at times embarrassingly close in style to Styx’s Dennis de Young, but the super raw guitar tone of Rick Hinkle ups the metal quotient into the red at times and, though this is definitely of it’s time, you’ll find plenty to enjoy on Air Raid – Scott Adams

A is also for … Akira Takasaki
Although Japanese guitar hero Takasaki has recently celebrated forty years in the music business, meaning he’s been performing since the seventies and continues to be highly active to the present day, it was really in the eighties that he came to the attention of the mainstream metal public. Like many, I first came to know him through the riotous, Scorpionsesque heavy metal of 1985’s Loudness album Thunder in the East, with its ridiculous catchy single Crazy Nights, but closer inspection to the man found that he was more, so much more than just a catchy riff mechant. 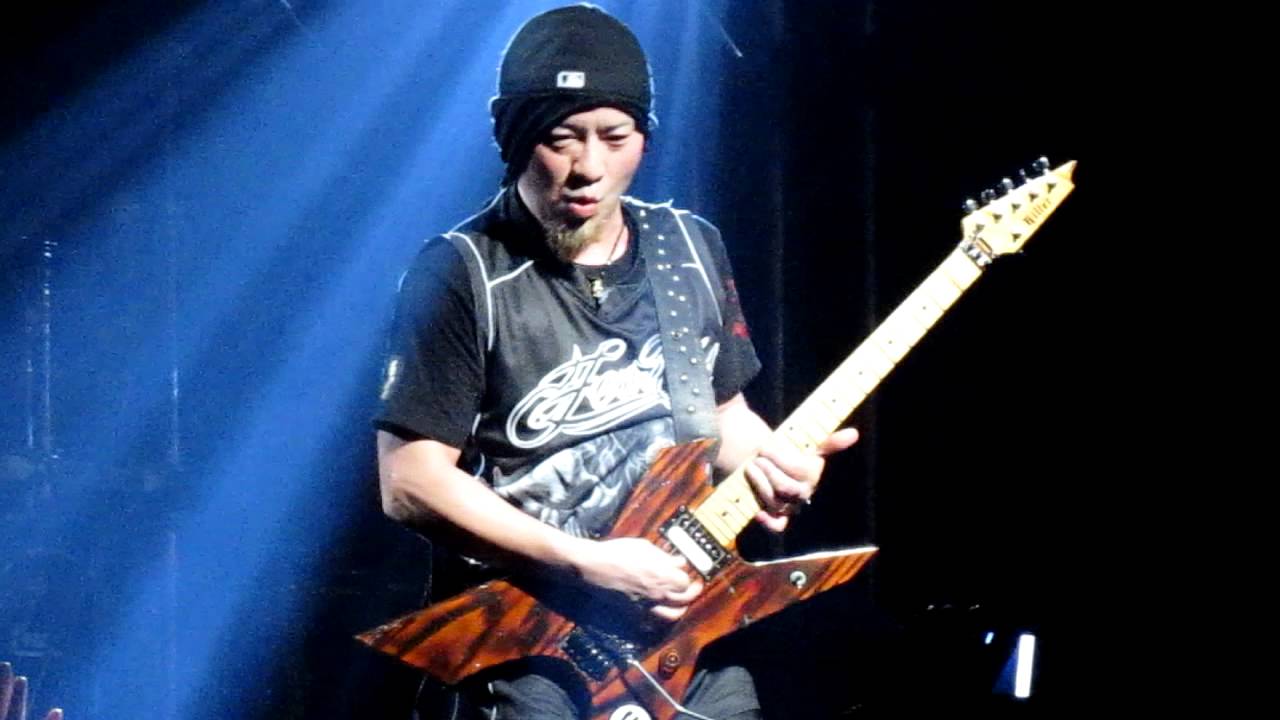 Blessed with the sort of technique that even Edward Van Halen might feel a little green about the gills about, Takasaki is a relentlessly impressive soloist too, as I found when I picked up a copy of the band’s magnum opus, 1984’s Disillusion, in a second hand record shop a few months after hearing Thunder…

In fact, the limited breathrough of Thunder in the East in the States was probably no good thing for the band, as they were railroaded into the sort of metal that was popular on the radio rather than the out and out metal with prog tinges with which they made their name. By 1986 the band was running through wimpy radio rock like Let it Go from their Max Norman-produced snoozefest Lightning Strikes and the game was effectively up (that’s funny… I thought you loved that stuff – dubious Ed.).

Of course the band are re-energised now and go down a storm on the metal nostalgia circuit, but those of us who know still hark back to those trail blazing days of the early eighties and the Crazy Doctor… – Gavin Strickmann

A is also for… Alcatrazz
Featuring the powerhouse vocals of former Rainbow and Michael Schenker Group (amongst others) vocalist Graham Bonnet and, variously, guitarists Steve Vai and Yngwie Malmsteen, Alcatrazz should have been huge, yet somehow they let everything slip through their fingers.

The first Alcatrazz album, No Parole From Rock n’Roll, is a minor classic of it’s type, sounding what maybe a heavy metal Rainbow might have sounded like, and hardcore fans will tell you it’s the best of the band’s three outings. For me, however, the more modern sounding second album, Disturbing the Peace is more worthy of a fuss. The only one of the three albums the band recorded to feature Steve Vai, it’s also probably the best heavy rock album that the guitar virtuoso has ever been involved in (and I know most of you reading this would laugh at me and say his work with David Lee Roth is better, but I’d counter that with the proposition that he was just playing a mini-Evh role in Roth’s band – Vai is very much his own man in Alcatrazz). As ever, ego problems and music industry wrangling prevented the band from reaching it’s full potential, and the band’s third album, Dangerous Games, is a pale shadow of the first two. – Gavin Strickmann

A is also for… Americade
Most famous for being the band that featured Dan Spitz of Anthrax’ big brother Dave ‘The Beast’ Spitz, Americade were one of those peculiarly American success stories of the seventies and eighties – a band that were able to put on huge productions locally but somehow never able to make it as anything other than a regional big noise. Indeed they were so big that Spitz minor’s earliest ambitions for Anthrax were that they could put on as big a show as Americade, who boasted a ‘large setup’ and delivered a ‘loud, large show’…

Built around the de Marigny brothers, Gerard (bass, guitar) and PJ (vox, keys), the band started out as a jazzy, fusion type band a la early Journey before seeing the light in the early eighties and converting to metal. Their 1982 debut, the patriotically-monickered American Metal was a riot of raw guitar tones and histrionic vocals –with tracks like Showdown really showcasing the bands chops if not their production nous. 1983’s Rock Hard was far better, benefitting from a more sympathetic production – courtesy of Kansas/Saxon producer Jeff Glixman – and being full of catchy, heavy melodic metal that’s very much of it’s time but no less a pleasure to listen to – seek it out if you can.
The album failed to make an impression, of course, and the band limped on thanks to the grit and perseverance of Gerard into the mid-nineties, never really threatening to relive former glories – Scott Adams