A is for A.S.A.P.
Or, as you probably all know, Adrian Smith and Project.

Seasoned Iron Maiden watchers had sensed that guitarist Smith was becoming burned out by life on the Maiden treadmill, and that he desired some sort of outlet for his undoubted (but decidedly non-metallic) songwriting talents.

Pre-Maiden he’s been in excellent East End pub rock outfit Urchin, whose metallised take on the Small Faces sound had inexplicably failed to ignite the imagination of the masses in London, and the band withered away despite snaring record and management deals as the scourge of punk swept through the industry, leaving feelings of unfinished business around the band. So it’s unsurprising that, when Maiden went into hiatus at the end of the Seventh Son of a Seventh Son Tour, Smith would call on former Urchin compadres Andy Barnett (the be-permed guitarist later to energise AOR titans FM with his lively on-stage persona and questionable taste in shorts) and keyboard player Richard Young in A.S.A.P.

On the face of it it’s hard to see why Silver and Gold – the one album A.S.A.P. managed before Smith went back to Maiden for the godawful No Prayer for the Dying album – failed so miserably. It’s an incredibly solid, well-crafted album, full of blues-tinged hard rock that at times verges on A.O.R, all the songs showcasing Smith’s pleasantly gritty vocal and, of course, his silky guitar skills. Along for the ride as well as the other Urchins were drummer Zak Starkey and third guitarist and top ligger Dave ‘Bucket’ Colwell; But somehow this arsenal of talent still failed to do the business and Silver and Gold was destined for a life in Bargain Bins all over the world. Which is a shame for Smith, but a bonus for cheapskate fans of quality hard rock – seek out the album, it’s well worth a punt. – Gavin Strickmann.

A is Also For… ATC

ATC – or, to give them their full name, A Touch of Class, emerged into public attention from Sweden in 1984 with a record deal from Vertigo that resulted in the release of just one album, released in that same year and called Cut in Ice. It’s a solid enough effort, featuring one or two really killer cuts and actually probably failing only because it was a couple of years ahead of it’s time- by 1986 many bands would be taking the band’s superior template of UFO, AC/DC and the more melodic aspects of the NWoBHM to much higher levels than ATC ever managed.

Vocalist Hakan ‘Spider’ Soder was a solid enough voice out front, but perhaps the most interesting thing about the band is that it housed two of Sweden’s greatest heavy metal guitar talents, both of whom thankfully went on to better things after ATC folded in 1985; Mats ‘Mappe’ Bjorkmann of course went on to join doom legends Candlemass in time for their debut album Epicus Doomicus Metallicus in 1986, whilst Tommy Denander, despite appearing on records by David Hasselhoff and singing dentist Dr Alban went on to great success as one of hard rock’s most in-demand session player/producers, contributing to releases by such Sentinel Daily-friendly acts as House of Lords, Robin Beck and Fergie Frederiksen amongst many others. – Gavin Strickmann

A is Also For… Autopsy

Another band just creeping in at to our survey at the arse end of the decade, Autopsy are probably more synonymous with the death metal boom of the early nineties; yet there’s no denying the sheer, fetid, malodorous stench their album Severed Survival spread over the metal world in 1989. Having ended his association with genre Titans Death in 1987 , Autopsy stalwart Chris Reifert teamed up with guitarist Eric Cutler (most recently seen in the excellent Necrosic) to form Autopsy. The rest, as they say, is history.

Severed Survival is a must-have if you’re a death metal newbie, a tasty mix of thrash metal-infused death with occasional doomy flourishes, the whole being undoubtedly years ahead of it’s time and incredibly mature for a debut album in a nascent scene. Says Sentinel Daily‘s own Josh Nixon: “Without Severed Survival, there’s likely no Sunlight Studios or Swedish death metal in all its glory ala Nihilist/Entombed, Grave or Dismember. It’s hugely influential. But really it’s not a single thing in my opinion, Death, Autopsy & Morbid Angel between them took the rawness of Napalm Death and refined it into death metal”.

Autopsy continue releasing great death metal to this day, delivering an EP, Skullgrinder, at the end of last year. But they’ve never quite replicated the leprous grandeur of Severed Survival and it’s follow up, Mental Funeral. – Scott Adams

A is also for… Avenger

Hailing from the early eighties metal hotspot of the North East of England – and not to be confused with the German outfit od the same name plying their trade in the mid eighties, Novocastrians Avenger merged the most violent aspects of the NWoBHM with a proto-speed metal sensibility in a way that actually had them marked down as contenders for a brief while. Debut album Blood Sports was as raw as you like, harnessing the Raven aesthetic of raw, rough and ready rifferama and clattering rhythmic punch – have a listen to the excellent Enforcer for proof – whilst second effort Killer Elite developed the band’s themes with the aid of a slightly better production and a marked increase in performance, especially from vocalist Ian Davison Swift. 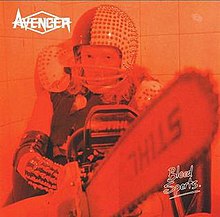 However, as seemed the norm for any band on their label Neat with the exception of Venom and Raven, industry incompetence from the people in charge of the finances seems to have stymied the band, despite their willingness to work hard at anywhere and any time – they initially elected to call it a day after an ill-starred four month stint in the US – with the result that, like so many of their ilk, the band found oblivion more accomodating than a continuing relationship with their label. Ian Davison Swift turned up shortly afterwards fronting Brit thrash hopefuls Atomkraft. A new version of the band resurfaced in 2005,  and the band released an album in 2014, The Slaughter Never Stops, that stays true to the initial tenets of the band whilst adding a modern sheen to the band’s sound. – Gavin Strickmann