A is for… Axe
Texans Axe may well have looked like the mutant offspring of a bunch of Mad Max extras and inmates of the local high security mental facility, but their music was a highly finessed hard rock/AOR hybrid built to show off the extraordinary talents of guitar playing vocalist Bobby Barth. They released their first album in 1979, but built steadily to their best work in 1983’s Nemesis. Cannily attaching themselves to the burgeoning NWoBHM movement simply by their name (which they’d cleverly changed from the slightly less menacing Babyface before joining MCA Records) and a series of headbanger-friendly album covers, the band actually purveyed a highly sophisticated mix of muscle and melody, which is possibly why they just fell short of the big time after Nemesis was released. The hair metal revolution was on the way, and a bunch of over-talented gargoyles couldn’t really be shoehorned onto MTV to take advantage, no matter how ear-friendly their material was; the band found increasing disinterest confronting them in industry circles, and imploded rapidly, with Barth first jumping ship to record a rather pleasing (if necessarily Michael Boltonesque) solo album – which stiffed – before hitching his wagon to Southern boogie merchants Blackfoot.

The band reformed in 1997 with Barth rejoined by fellow original members Edgar Riley Jnr and Teddy Mueller, and still tour to this day, albeit without any members from the days of the band’s debut album left at all. – Scott Adams

B Is for… Balance
Part of growing up as a young metal fan in the early eighties was reading in metal bible Kerrang! About all of the highly-exotic US bands that only ever released albums on import and would never in a million years come to the UK to play any shows. New Yorkers Balance were just one such of those bands, so, imaging my delight on leafing through some records in a junk shop at the Seaside on holiday in 1983 to come across a copy of Balance’s self-titled debut album, with a sticker on it bearing the legend ‘fire-damaged – 10p’. A legendary American hard rock album for 10p? I’ll have some of that, slight foxing on the sleeve or not, I thought…. And a love affair was born.

Essentially a tasty mix of the smooth, soulful vocals of Peppy Castro and the biting lead guitar work of Kiss associate Bob Kulick (he played all of Ace’s parts on Creatures of the Night! He was part of Meat Loaf’s Neverland Express!), Balance released two stupendous albums chock full of uber-melodic hard rock that have rarely been equalled in the AOR field. Castro could, as the saying goes, sing the phone book and make it interesting, but essentially for those with ears attuned to heavy music it’s the scything yet sophisticated lead work of Kulick that makes both Balance and its successor, Down for the Count worth digging out. – Scott Adams

B is also for… Beyond Possession
Beyond Possession … Is Beyond Possession. What an album. In 1986 ‘crossover’ was all the rage, with the world and his wife (all right, it wasn’t quite that popular. Maybe grade that down to ‘every heavy metal band failing to make it’) donning comedy shorts and hitops in an effort to prove their ‘punk’ credibility (whilst all the punx were learning to play guitar solos to appeal to the metalheads – crossover was definitely a two way street.).

The upshot of this scramble for cash and credibility was often quite horrible, but not in the case of BP. Hailing from Canada – very cool, given the presence there of bands such as Voi Vod, Razor, Sacrifice and, um, Exciter – and possessing the skills to turn in an album as accomplished as this in just three days in the studio, (as well as a demo many die-hards will tell you is even better than the debut album) everything seemed set fair for the band, who featured a staggeringly good bassist (Jaime Kenney) and a singer, Ron Hadley, who’s ability to spit out scattergun lyrics was up there with the best in the business. 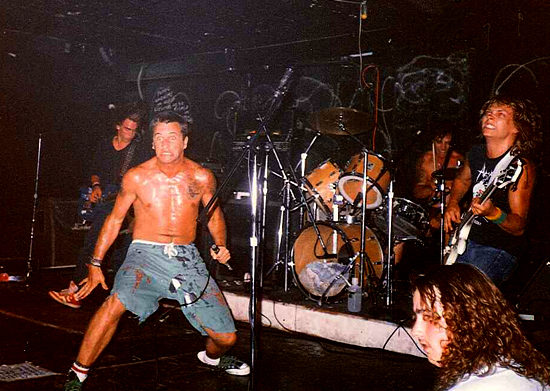 So what went wrong? Well, considering I’m meant to be an expert, I’m ashamed to say I don’t know. A compilation album came out in 1989 gathering the band’s career together in one easy-to-digest package, and the band got back together briefly in the mid nineties, and then… silence. A real shame, but the legacy they leave, whilst very brief, is well worth revisiting.

B is also for… Bitch

Bitch’s lead singer Betsy Weiss was originally vocalist in a Ska band, but thankfully saw the light around the turn of the eighties and hitched up with the metal band with whom she was to become synonymous. Despite a slightly tacky image that was to launch a million bedroom fantasies but precious few record sales, Bitch were actually a more than competent, at times corrosive band whose stock-in-trade – up front, coarse-vocaled yet shot-through-with-melody trad metal, has actually stood the test of time very well, as evinced by the fact that bands are still ripping the blueprint off to this day (qv: Savage Master). The band released a couple of albums and a couple of EPs in their eighties ‘heyday’ but despite plenty of positive press could never make sufficient headway to become anything other than a cult attraction. 1982’s Damnation Alley EP is probably the best of their vinyl releases, possessing a certain naive charm in Weiss’s vocal delivery to go with David Carruth‘s  scything riffage and the Philthy Animalesque drumming (courtesy of the sadly now-departed Robby Settles), and an almost new wave style to the songwriting, but both 1983’s Be My Slave and (to a lesser extent) 1987’s The Bitch is Back both have enough moments of metal grandeur to warrant a spin. – Gavin Strickmann