You’ve announced a (hopefully) lengthy tour to promote your new single, for which I’m sure you’re already receiving the heartfelt thanks of gig-starved rockers everywhere – how hard was it to get venues locked in in the current climate, and did you have to jump through many COVID-related hoops to get things sorted satisfactorily? “Booking a tour is always a lot of work; We’re super lucky this time around to have an amazing team of people working with us, our management/booking lords CT and Rick at Beats Cartel are in constant communication with us, venues ,bands, artists… hats off to any one booking gigs right now, honestly… We are on the fuckin’ edge, booking a tour now is risky. Restrictions change so frequently, in 2020 we had our biggest tour cancelled, supporting Kadavar and Deville. It was a bummer for sure. We’ve got our fingers crossed and are checking the updates daily… COVID has taught us how to not get our hopes up. But we’ve gotta keep trying, we had built up some steady momentum before it hit and we’re going to try and do what ever it takes to keep it going.. we’ve done a few shows in Sydney during the pandemic, and people are frothing for live music…we’re frothing for it too…”

I think we all are! We Mentioned the single – Leviathan Rising, which comes from your upcoming new album, Astrodeath Vol.2. Tells us a bit about the former, and when can we expect to be able to treat our ears to the latter? “Leviathan Rising is the first single from Vol.2, which is a concept album that will tell the story of a cosmic conspiracy, of alien invasion and total domination. As with our last record we will be releasing it in a limited edition comic book illustrated by Glenno Smith, with a download code. We’ve got a real fun music video in the works that our good friend Mitch Hertz is throwing together for us on a super tight time budget. The single will be recorded on the 24th of January and the video will be shot on the 25th and ready for release a couple of days after that. We’re recording this next record with our good friend and super talent engineer/producer Nick Franklin. Nick recorded our last record mostly live to tape at Sydney’s Linear recording studio. Linear was an amazing place to record with huge amounts of vintage gear, this time around we just don’t have the budget, so we’re going ghetto and recording at our rehearsal space in Marrickville dubbed Shabby Roads… We have no doubt that Nick will be able to make this record sound even better than the last one without the big fancy recording studio…he’s a goddamn genius. we’ll be putting out a limited edition vinyl through label Black Farm Records. We’re not too sure on a release date for that just yet though. Won’t be long”.

I’m already talking to a lot of bands who have been stockpiling material during lockdown for enough albums to last them for four or five years or more – were you similarly musically fecund last year? Do you find writing comes easily? Should we expect Astrodeath volumes three four and five in short order? “We’ve tried to choose the best cuts for this record but we’ve got some in the vault for sure… we’ll see what happens we hope to get on the road and play a million shows. But if that isn’t viable we’ll definitely start vol.3 this year”.

Duos are still a comparatively unusual phenomena in metal – what made you decide to form Astrodeath as a two piece and what do you see as the advantages of that set up over, say, a power trio or a quartet? Did you take influence from other already-existing duos whilst forming the band? “We’re definitely not pioneering anything, I think two piece bands are getting pretty popular now… there are a bunch of sick heavy two piece bands. My main influence to start a two piece was the nineties but still very active Local H. When I saw videos of those guys playing I felt it was possible to achieve what I wanted. Whilst we don’t borrow anything from their sound I did copy a guitar hack from Scott Lucas and put a bass pickup under my two lowest strings.. Local H sounds like a three piece band. That’s what I wanted to achieve. Here are a few Aussie two piece bands that I like… Dead, Lucifungus, Witch Fight, Particles, King of the North, The Royal Artillery, The Swells, and probably missed a bunch… they’re out there… What I like about duos is you can really hear people’s personality and creativity shine through, there are constraints when writing songs with only two instruments that you don’t have in a larger band, and there’s no one to hide behind. The main reason and benefit of it is just not having to deal with four or five peoples lives, me and Yoshi can call each other up and have a conversation and get shit done and that has allowed us to move a lot faster than other larger bands I’ve been in. And we just get along really well…so that helps”.

The mighty Local H! A great band… Is this tour just the start for 2021? Are you hoping to get more miles under the belt later in the year? “Who knows? Hopefully we can just tour relentlessly like we’ve done pre-COVID. In 2019 I think we played about seventy shows ..we want to get back to that. As I said we’ll just take what we get, but we won’t be slowing down, we will find a way to make the noise

Anything else you think the readers of Sentinel Daily should know about Astrodeath? “We just hope that if the readers dig what they hear, or want to know more, that they reach out online or come to a show, we love to hear from people that dig what we’re serving up… keep it real”. 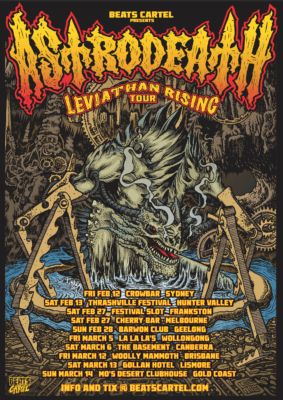