Medevil – Conductor of Storms (Own Label)

Medevil – Conductor of Storms (Own Label)

In the press release I was sent to accompany this album, the reader is informed that Chiliwack, BC natives Medevil finished in the top 6 in their local ‘battle of the bands’ playoff to send a Canadian Band to the Godhead of all heavy metal festivals, Wacken.

This is quite astounding information, because if they didn’t win the damn thing I’d love to hear the bands that beat them, because Conductor of Storms is one of the most complete, fully-formed and damn near perfect debut albums I’ve ever heard from a young heavy metal band. Tracks like Escape – a blustering, no-holds-barred mashup of Metal Church, Megadeth and Overkill – are just so mature, so faultlessly executed and so, well, heavy metal, it beggars belief that they are not being delivered by a band that’s been in the game for thirty years.

Central to all this are the vocals of Liam Collingwood, the possessor of an old throat despite looking sickeningly young in the band promo pictures. At times he’ll remind you of Udo Dirkschneider, at others you’ll think Bobby ‘Blitz’ Ellsworth was lurking around the studios on recording day. Maybe you’ll get a hint of Mike Howe’s banshee wail. However, whoever the man reminds you of is irrelevant. The fact that he’s got the pipes to get anywhere near any one of those names is what matters, and his performance throughout is a near faultless exposition of heavy metal vocalising. 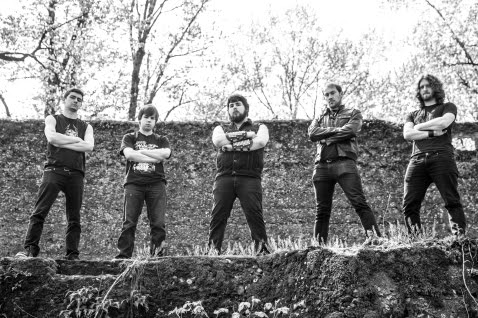 He’s not alone though. Guitarists Garry Cordsen and Brett Gibbs both shine, especially on closing epic The Fabled Uxoricide, and some of Cordsen’s lead work is utterly exemplary, especially as this last track wends it’s way through twelve exciting minutes powered by rhythm section Ross Collingwood (drums) and bassist Eric Wesa. Their work together on the all-too-brief instrumental interlude In the Distance is pure ear candy, and a joy to listen to, especially if early Metal Church gets your motor running, whilst standout track The Angel of Rain is another proggy, axetastic tour de force.

There’s nothing groundbreaking or even vaguely original on Conductor of Storms. But what Medevil have done is take all the things we know and love about ‘proper’ heavy metal – great singing, solid, at times highly impressive musicianship and, most importantly, songwriting craft and flair, and formed them into something that is at once familiar yet exciting – very exciting – to listen to. And the fact that they are so young makes this release even more exciting. I can’t praise it highly enough.