Punx unite! US street punkers The Casualties have been going since 1990, striving to recreate the classic street punk sound of the UK82 movement that spawned bands like GBH and the Exploited; Over the years, their sheer unflinching Americanness, if that’s a word, has seen a fair bit of the US hardcore sound leech into the original recipe (on this album, for instance, the stench of Agnostic Front is heavy on tracks like Running Through the Night and United Streets), resulting in the Casualties v.2016 sounding like a sort of genetically-modified take on what a ‘classic’’ punk should sound like.

For someone like me, who was a glue n’cider addled youngster myself in the mid eighties, it’s all a bit chucklesome, never more so than on the Rancidesque call to arms Brothers and Sisters; It’s hard to take seriously in a way, notwithstanding the obvious sincerity with which the whole thing is delivered. Lead vocalist Jorge Herrera might as well have CONVICTION tattooed on his forehead – although that would probably leave him with a pretty big forehead – such is the death or glory sense of maniacal devotion he lends to every song. 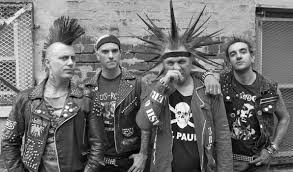 To be fair, Brothers and Sisters is just one song in what is otherwise a pretty entertaining, honest romp. Murder Us All bolts Misfits-style gang vocals to a riff that the Exploited cast off in 1985 but actually comes across as a pretty compelling proposition, whilst The Casualties covering Motörhead tributing the Ramones isn’t the car crash it might so easily have been. Work Our Lives Away is the sort of nihilistic, oi!-inspired fluff The Cockney Rejects might have sniffed around in 1984, complete with a simple yet catchy ‘Geggusesque’’ guitar solo; whilst Countdown to Tomorrow starts off with a half-inched symphonic metal intro before blossoming into the sort of crossover mayhem brit bands like Broken Bones were creating in 1986.

So you get the drift. If I have one real problem with The Casualties it’s their stupid adherance, shared with so many of their US brethren, that there’s something gloriously romantic about the Oi! movement. There isn’t. Middle aged moralising aside, young punx may well be swept up in the studded leather jacket and eighteen hole Doc euphoria of it all, and good luck to them. Me? despite really liking the band’s previous outing, Resistance, I can take or leave this stuff at the end of the day.

Chaos Sound is out now on Season of Mist

About the Author: Michael Stronge