“Thank you for coming”. Those four words are like music to my ears. They means I’m appreciated, valued, and welcomed. And it’s especially nice to hear when you’ve given up your time for free. I cover about half a dozen music festivals each year, and no two are ever the same. Some I’m invited to attend by the organisers, whilst others I ask to attend, to interview the bands. Do I get in for free? Yes. Does it mean I get to spend a pissed-up weekend watching bands in the sunshine? Not quite…

I’m there to work – that’s what I do, and I take my job seriously. I pay my own travel and accommodation expenses just like everybody else, but ultimately I’m at the beck and call of the bands and my schedule revolves around them depending on when they’re ready to be interviewed – even if it’s right in the middle of a performance I really want to see – it doesn’t matter, I have a job to do, and I do it gladly. I promote and publicise every festival I cover via my social media platforms and expect very little in return… entry to the event, somewhere suitable to hold the interviews and maybe even an occasional hot drink and some nibbles. Not much really. It’s a scenario we all benefit from; myself as a journo, the festivals, the bands and the scene as a whole.

When bands have a bad experience at a festival you will seldom hear about it (I’m not mentioning any names here but don’t get me started on the twenty five per cent merch commission fiasco…)
Often they’re new, emerging bands, afraid of being blacklisted, so they keep quiet and suck it up, for their own good. I, on the other hand, have nothing to lose by telling it exactly as I see it and if something stinks, I’ll spill the tea. Punters rarely get an insight into what goes on “on the other side” and would probably be surprised by much of what happens. We all want a better music industry don’t we? And that starts with using your voice, so here it goes.

This weekend I covered Planet Rock’s Winter’s End festival at a new venue, The Assembly in Leamington Spa. This was the second Planet Rock event I’ve covered (the first being the inaugural Rocktober in Sheffield, prior to the pandemic). A two-hour train journey and a horrendous hotel check-in later (almost everybody attending Winter’s End seemed to be staying at the local Premier Inn, which clearly wasn’t prepared for the mass influx of guests at three pm that Friday afternoon) myself and fellow music journalist and promoter Victoria Llewellyn (accompanying me as my video assistant) had arrived and were ready to start what we expected to be a fantastic weekend combining work with pleasure. Things however didn’t quite go to plan…

The venue itself in Leamington is a beautiful old building, perfect for a gig, but completely unsuitable for a three-day festival. Why? Well there was nowhere to sit for starters… nowhere at all, not even in the “VIP area”, where the poor bastards who’d paid extra for the privilege soon realised it was simply a balcony and nothing more. Not very VIP… and definitely no chairs up there for the ageing audience (no offence intended, I’m no spring chicken myself).

Were there any hot drinks available? Er, no. Food? Certainly not! Well, not unless you fancied a ‘Rock Dog’ (hot dog) from a metal vat for a fiver (to be washed down with a £4
bottle of water from the bar, or a drop of alcohol at even more extortionate prices)! Now, I had been advised by the festival organiser that there was no press room and no backstage area at the venue, but I’m pretty resourceful and usually able to find somewhere to conduct interviews…

Well, the only remotely suitable place was at the top of what I now affectionately refer to as “The forbidden staircase”, AKA “The fucking freezing stairwell of doom”! We weren’t meant to be there – hell, on the second day the stairwell was barricaded to prevent “non-VIPs” such as us from entering the coveted balcony, but stupid rules mean very little to me when there’s a band to interview and nowhere else to get the job done. I knew which bands I was planning to interview – I’d contacted them myself well in advance as well as on the day itself. Given that there was no official interview schedule in place and nowhere to meet, it wasn’t the easiest of rendez-vous to arrange. I was asked by a couple of the bands to conduct interviews with them in the backstage area. “What’s this?” I said. “The backstage area that I was clearly told doesn’t exist?!” I kept my cool, I found the bands, they took us backstage, and it was… ideal! Leather sofas, tables, tea and coffee, exactly what you’d expect to see at a festival as a member of the press. I did some great interviews in there and the bands were absolutely charming, but it was freezing in that icebox of a venue, we hadn’t eaten and I was starting to wilt… And that’s where it all went horribly wrong!

Noticing a long buffet table full of hot nosh that had been left to go cold after those in the backstage area had partaken of the fast-food feast, Victoria encouraged me to eat something. “Go on”, she said, shoving a paper plate and wooden fork into my hand, as I peered down at the cold but delicious leftovers laid out before us. No sooner had the plate touched my hands than the festival organiser, who there is no point in me naming, spotted me, made me put it down, and told me in no uncertain terms that we shouldn’t be there, in spite of watching me spend the previous however long it was conducting interviews right in front of him. No “Thank you for coming”, then!

Is this really how members of the music press are treated these days? By an organisation who treats its paying customers with such contempt as to not even provide the most basic of amenities? At a venue whose Ladies room had so many ‘Out of Order’ cubicles, to appear just as unprepared for guests as our poor wretched hotel was?! It’s worth adding that the cubicles that didn’t have an ‘Out of Order’ sign on the door either had no door at all, no light, or didn’t flush… and don’t get me started on the absence of hot water and bins (both sanitary and waste paper) in the Ladies… That said, us womenfolk actually fared better than the gents from what I could gather… at least we didn’t have to put up with overflowing, puke-filled, stinking loos for three days on end. Shit indeed! 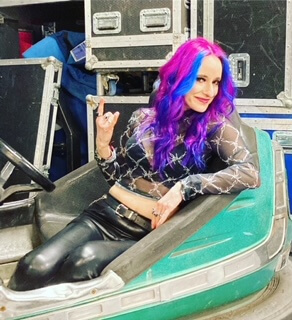 Let’s be clear, tickets for this festival weren’t cheap and we witnessed people complaining about its shortcomings as soon as we arrived… with good reason. The bands, the music, all that was good – no complaints there. But does having a good lineup and a bar mean we should just accept poor service, non-existent hospitality, unsanitary conditions and downright hostility from the organiser? Never before have I felt so unwelcome at a festival. Why on earth weren’t we permitted entry to the backstage area?? Was it actually a top-secret alien autopsy lab down there?! The whole thing left a very bad taste in the mouth… probably as bad as one of those £5 hotdogs. We deserve better, as punters, as professionals, and as human beings.

Am I afraid of being blacklisted by Planet Rock? No. Sadly I wouldn’t cover another of their events even if they paid me. My journalist colleagues who were there from other publications are well aware of how myself and Victoria were treated and it hasn’t gone down well. We are females trying to get on in a traditionally male dominated industry. It’s been said to me by both men and women who have been in the music industry longer than I have that there’s still an “old boys club” mentality. I always hoped it wasn’t true and I’d have no way of proving it either way, but for an organisation like Planet Rock to treat two female journalists in this manner, given their gaping lack of female Presenters, does make you wonder what’s really going on…

On more than one occasion we were told off just for trying to do what we were there specifically to do! Things couldn’t have been made more difficult for us if they’d tried, and based on our experiences, they did try. We weren’t being a nuisance, annoying anybody, drunk, doing anything inappropriate… but we were spoken down to and made to feel like we weren’t wanted there, which is unacceptable in my book. Planet Rock should be setting the bar for UK festivals, not allowing their standards to slip so low as to be outdone by the smaller, newer festivals, who put on just as good a lineup, particularly when it comes to showcasing up and coming artists, but know how to treat their guests and invited press with courtesy, decency and respect. I’ll be promoting them on my socials and hope to see many of you there. So, Rockers – demand better, expect more, and vote with your feet. Don’t allow yourself to be treated like the stuff spewing out of the Gents. No-one should ever have to leave a festival feeling disgusted, for any reason. I won’t accept it, and neither should you.

About the Author: Anne Estella