D is for … Dammaj 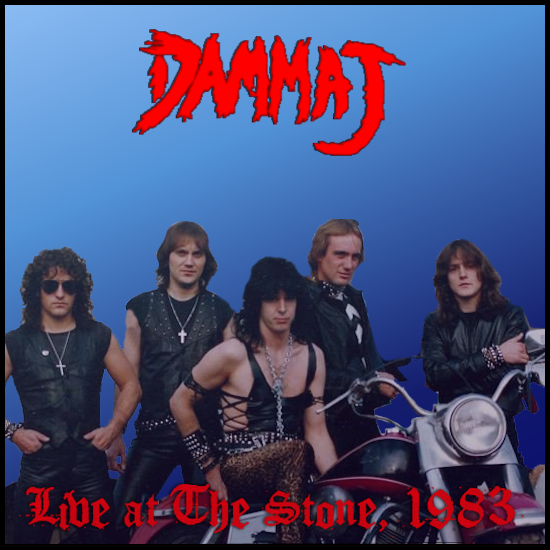 San Franciscans Dammaj made one full length release as well a clutch of demos and singles in the mid eighties, the full-length (Mutiny) being a rare piece of trad metal business for the then thrash-obsessed Roadrunner label.

Actually, calling them denizens of San Francisco is a bit of a stretch; the three Gilbert brothers (Rich and Mick on guitars, Steve on the four string motherfucker) who formed the core of Dammaj actually hailed from the less rock n’roll climes of Luton in England, being joined by yank vocalist Greg Hill and drumming compatriot Bob Newkirk, but SF is where they lived so we’ll go with that.

Sadly the band didn’t entertain originality overmuch; song titles like Devils & Angels, March of the Gladiators, Leather Master and Clashes of Steel are testament to that fact. But there’s a real class to the material – not a million miles from what retro metallers Sumerlands released last year, come to think of it – that once again gives rise to the question: ‘Why weren’t these blokes bigger?’.

Listening back to the album now, it’s hard to see how the band were any less deserving of a major deal than, say, contemporaries like Malice or Warrior, both of whom had big bucks sunk into their causes to little or no avail. Mutiny sounds like the work of a fully-formed, rather good trad metal band in 2017 precisely because that’s what it is, but the band, conspicuously image-free despite the ‘pirate’theme pervading the album, just didn’t have the x-factor required to make woozy record company talent scouts take note.

The band withered after Mutiny sank without trace, reforming in 2010 and releasing a couple of singles four years later, but neither made any impact and they remain one of the great unsung bands of the mid-eighties. – Gavin Strickmann

D is also for… Darxon Bochum natives Darxon surfaced initially in the early eighties, releasing a couple of records on the Wishbone label; Their 1984 debut full-length effort Killed in Action was followed by the Tokyo EP a year later, but, despite garnering something of a rabid live following in their local area, the comparatively plodding nature of their material in its recorded form (at a time when all the good bands seemed to be getting faster and faster) stymied their efforts at world domination. Tokyo is the better of the two early releases, with tracks like Heavy Metal at least demonstrating a bit of spark and an ability – or intent – to keep up with the big boys. The band released a further 7” single on Wishbone in 1986 before turning up on German label Rockport a year later with an album, No Thrills, an altogether more interesting prospect indeed.

Finally embracing the need for speed being felt almost everywhere else in Europe by 1987, No Thrills is an excellent, erm, no frills trad metal workout that finally proved that Darxon had it in them to be contenders – maybe changing eighty percent of the lineup had something to do with that. Opening track Banging was an enticing mix of compatriots Mad Max and Grave Digger, with vocalist Massimo de Matteis having a pleasant voice that maybe just lacked the requisite grit to force these superior, heavier compositions home. However on more commercial material, like the excellent Heartbreaker, he sounded right at home as the band made some pretty good (of its time) melodic metal.

The band persevered into the nineties, eventually turning up on – you guessed it! – Mausoleum Records for a 1992 album, Shout!, which saw them heading wholesale into full-scale melodic/hair metal territory with a sound not a million miles away from fellow Germans Bonfire. – Gavin Strickmann

D is also for… Di’Anno 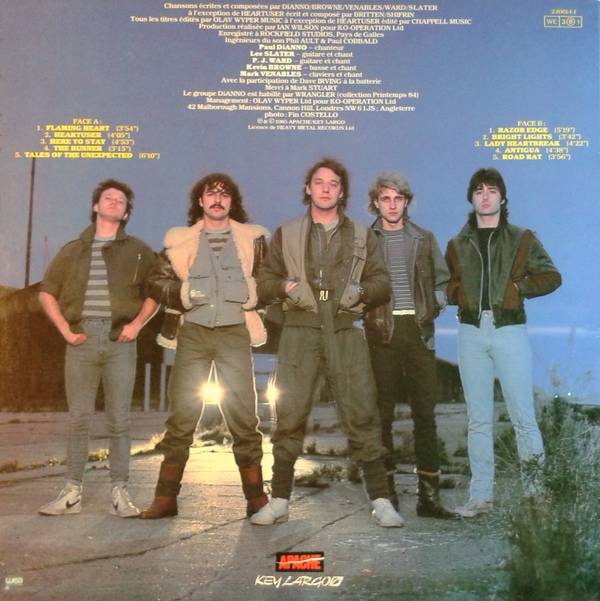 Not Battlezone, or Killers, but Di’Anno. That’s right. In this episode we going to have a look at the 1984 incarnation of former Iron Maiden alumnus Paul Di’Anno – the eponymous band and album he put out as a response to his split with what was to become arguably the biggest pure metal band of the eighties.

And it was very definitely a response; Moving about as far awAy from the storming metal of Maiden as was possible whilst still clutching at the word ‘rock’, Di’Anno was a keyboard-drenched ezxcursion into the world of AOR that unfortunately failed on just about every level imaginable.

In the cold light of 2017 it’s actually not that bad a record. At the time Di’Anno, ever the optimist, touted it as being in the style of Journey et al but the sad fact is he’s just not that classy a songwriter and the album actually sounds much more like something fellow NWoBHM stalwarts Praying Mantis (with whom Di’Anno actually shared a creative dalliance later in the decade) might have come up with. Songs like Heartuser (actually written by crack songwriters-for-hire Sue Schiffrin and Terry Britten), Lady Heartbreak and Tales of the Unexpected are really rather good, especially the expansive, slightly proggy Tales…, Di’Anno controlling his metallic urges to deliver a restrained yet still powerful performance which actually proves what a classy singer the man was.

But the overall feeling of facelessness – both of material and personnel – is what wins the day here. None of the musicians hired to form Di’Anno had what you might term a pedigree coming into the project (which suited the mainman down to the ground), and none did anything of note afterwards which possibly points to a lack of real skill or staying power in the song writing stakes. Keyboarder Mark Venables adds colour to the songs but the lack of real pyrotechnic guitar playing – a la Journey, Paul – really counts against the album.

Di’Anno, of course, went on to enjoy a ‘colourful’ career, lording up his reputation as one of metal’s iconic frontmen to the full, leaving Di’Anno – the album and the band – as merely a historical curio in the man’s long and storied career. If you can get hold of the Japanese version of the album, called Two Swimmers and a Bag of Jockies (named in honour of the cockney term for Fish and Chips), look after it as it’s worth over a hundred euros a pop in mint condition on the open market… – Scott Adams