B is for… Brocas Helm
As a young seventeen year old headbanger I was seriously taken with US metallers Brocas Helm; For a start they were named after a Medieval jousting helmet, which seemed to me to be very metal indeed. But then I actually heard a couple of tracks from their debut album Into Battle on Tommy Vance’s Friday Rock Show on BBC Radio One and that sealed the deal. Fiery, fast, epic proto-power metal was the name of the game – In fact I’m pretty sure history will show that Brocas Helm were one of the first ‘true’ metal bands to come out of the US in the eighties – a sort of hellbent for leather take on the blueprint that got to where Manowar so desperately wanted to be but did it shorn of the ridiculousness of DeMaio and company.

Harnessing the naïve power of the NWoBHM to the sort of superior chops all American bands seemed to have in those days, Into Battle is one of the great lost classics of true metal. Every track is an absolute stormer, from opening track Metal Fury all the way through to the crushing closer Into the Ithilstone; Night Siege is basically the cornerstone of the US power metal sound (and was successfully revamped by Riot as Thundersteel a few years later, to my mind), powered by the insane (and sustained – he keeps it up all the way through the album) drumming of Jack Hays. Guitarist Bobbie R. Wright was a great find too, sharing a similar style to Virgin Steele’s Jack Starr, while bassist Jim Schumacher – like Joey DeMaio – wasn’t averse to a bit of lead work on the four string either. In fact the only thing that let the side down was the slightly strained sound of Wright’’s voice which just didn’t possess the power required to hold it’s own against the metal storm brewing around it.

Amazingly the band were releasead from their contract after the release of Into Battle and it took them another five years to get a second album out, Black Death, by which time the metal world had moved on into the realms of thrash and beyond, leaving Brocas Helm standing on the shore waving forlornly at the boat they’d just missed. A third album was released, Defender of the Crown (in 2004) which is really rather good but by then the band were nothing more than a nostalgic curiosity for metal tourists wanting a bit of denim cutoff nostalgia, which is a great shame. Last seen playing live in 2015, this is one band that really does deserve some serious revisiting. – Gavin Strickmann

B is also for… Jon Butcher Axis
Often (to his mind) unkindly criticized for aping Jimi Hendrix (he was black! He played a strat!), Boston guitarist/singer/songwriter Jon Butcher forged a nice little cottage industry with his Axis in the early eighties, releasing three major label albums and being a ubiquitous arena support act for most of the first half of the decade, as well as being pretty much the only coloured face you’d see on MTV in it’s early days apart from Michael Jackson. 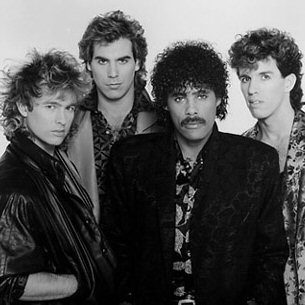 Butcher was a fine guitarist who also had a knack for penning perky pop rock and AOR (the Axis’ first album in particular is full of spicy of-their-time nuggets like Life Takes a Life and Ocean in Motion) and a pleasantly familiar, slightly gritty vocal style that fitted perfectly with what US Radio was playing at the time, ensuring an appeal right across the board, meaning that JBA were as at home supporting pop stars like fellow Bostonians the J. Geils Band as they were on the undercard at a Def Leppard or Kiss show.

But America was literally awash with bands that sounded like The Jon Butcher Axis and so the band, without the huge hit single required, just failed to make the jump from perennial support to big time headliner. Butcher formed another band The Barefoot Servants, with longtime Phil Collins sideman and superior beard grower Leland Sklar on Bass but this was also a near miss rather than a target-hitting success and inevitably Butcher reformed his Axis in the twenty first century, In 2014 he released, you guessed it, an album full of his interpretations of the Jimi Hendrix Canon… – Scott Adams

B is also for… Byron Band
It’s a tried and true industry trick… Take a washed-up, on the way down old rock star, pair him with an up-and-coming young hotshot who’ll resurrect the rock star’s career, kick start his own, sit back and start counting the cash.

At least that’s what’s meant to happen. David Byron – former Uriah Heep vocalist and one of the greatest vocalists of his generation – had been spiralling out of control since being ousted from Heep at the behest of fellow band member Ken Hensley in 1975, releasing a couple of tepid solo albums and generally being unable to get anything done but, apparently, uncork the next bottle. Robin George, the hottest guitarist in the UK’s Midlands, was generally considered to be a star in the making; Surely a marriage of convenience of the two would be the Faustian pact everyone (but especially Byron) was looking for?

Sadly not. Despite recording a fine album under The Byron Band flag of convenience, choc full of Heepesque, theatrical hard rock penned by the pair to show off Byron’s still-impressive pipes to maximum effect, the record industry – but perhaps more importantly, the record-buying public – remained unmoved by the confluence of young and old master, and once again, sadly, Byron found himself rejected and on the outer. What makes all of this doubly frustrating is that live tapes of the Byron Band from around the time of the album’s release show the man to be pretty much at the top of his game vocally, ably backed by a band that could play the Heep tunes the fans wanted to hear deployed alongside the new numbers… yet unable to fire up the imagination of his once loyal Heep following. The Byron Band recorded more demos, but fizzled out once George headed off to a solo career which birthed the excellent Dangerous Music album in 1985, the same year that Byron died from complications brought on by his alcoholism. – Scott Adams