Hello and welcome to the Easter 2021 instalment of the Crusade of Power! The last couple of editions have been among the best read of the entire series, and we certainly hope to maintain those levels of interest with this latest batch of goodies from the underground! Enjoy! 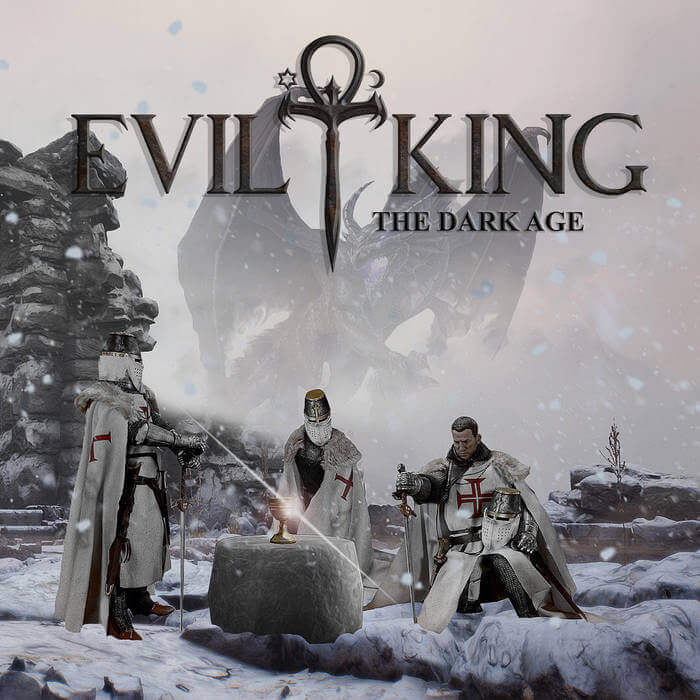 First up this month we have Greek/Argentinian outfit Evil King, who have just released their debut album The Dark Age. Centred around the excellent vocals of Pablo Ruiz Diaz, who has a pleasingly Dickinsonian twang to his voice, the band sit in the heavy/power metal theatre of operations, dealing in dramatic, impassioned tales of Templars and the Crusades – right up the Templeton alley!

Fans of everyone from Elvenking to Kamelot and beyond will find something to like here; The title track in particular packs a big melodic punch – almost veering into the sort of territory Europe explored on their pre-Final Countdown outings – and the lead guitar work of Spiros Rizos is a highlight throughout.

Lord Divine‘s Nahuel García Espinosa provides added vocal power to the excellent A Sinful Allegiance, and there are other vocal guests throughout who help to tell the band’s tales, but the simple truth is that they don’t really need a great deal of assistance – Evil King are very much the real deal on their own! 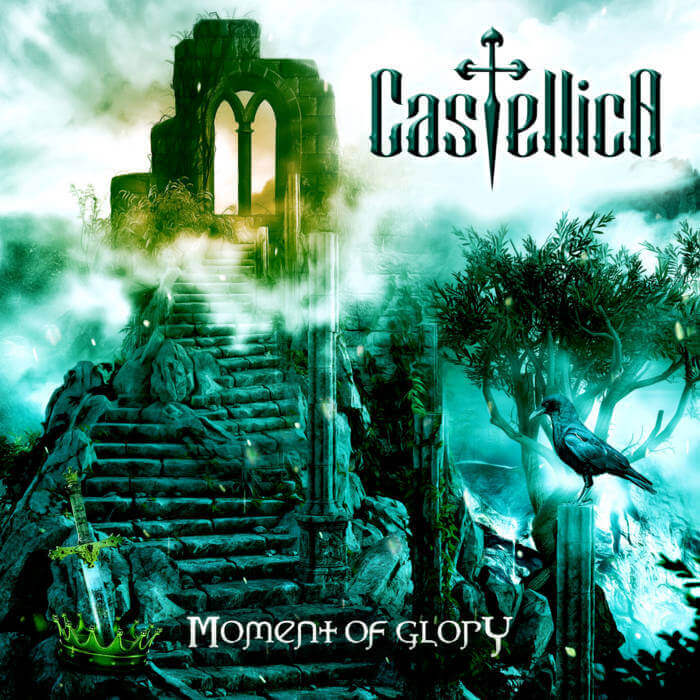 To Brazil now, and Castellica. Straight-up power/heavy metal is the order of the day here, and the band’s new album, Moment of Glory (which also happens to be their debut) is choc-full of the stuff. The opening brace of tracks, Holy Knight and Nightcrawlers, take care of the power element, but on tracks like Warriors the band opt for out-and-out trad metal, sounding like a cross between Power and The Glory-era Saxon and NWoBHM names like Battleaxe and Tokyo Blade.

This track is absolutely as good as that descriptor makes it sound, and throughout the album the band takes no prisoners, basing it’s assault on the strong, capable vocals of Thiago Colavite and his guitar-slinging namesakes Lucas and Danilo. Of course we’re not re0inventing the wheel here, as we so often state on the Crusade, but Moment of Glory is absolutely one of the most enjoyable no-nonsense metal albums we’ve heard around these parts in a while. Dust off your battle jacket, get an earful and do the guys a favour by investing in the album! 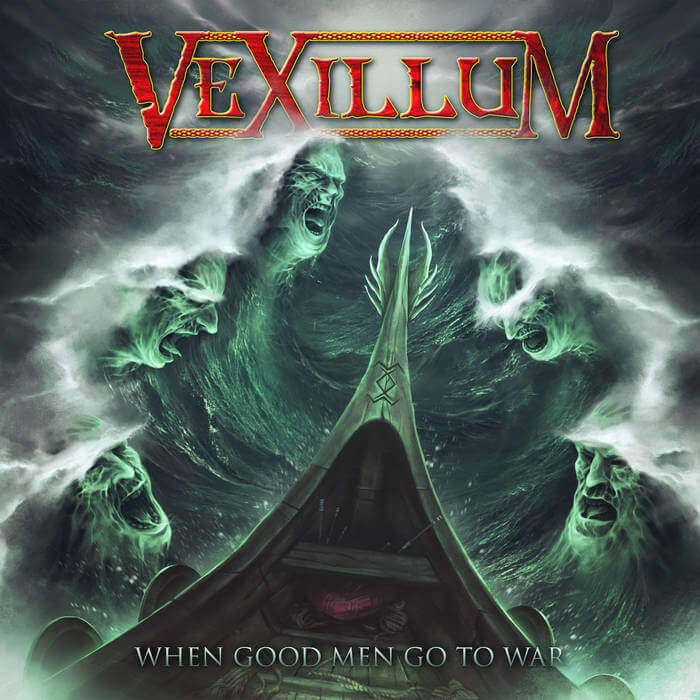 Italy’s Vexillum have been away for a while, with new album When Good Men Go To War being their first since 2015’s metal opera Unum. The band runs a nice line in anthemic, shoutalong power metal – the opening of epic first track Enlight The Bivouac lasts about two minutes before the massed ranks of chanting backing singers appear – and their galloping rhythms and enchanting tales of glory are incredibly infectious.

Bassist Francesco Ferraro is also a member of German power metal Titans Freedom Call, and there are moments here where the two acts overlap, but on the whole Vexillum are a far heavier proposition, relying throughout on the superb guitar pyrotechnics of Michele Gasparri and Francesco Caprina to keep things hard and heavy at all times. On occasion the band dips into a sort of Celtic style of metal that brings to mind Gary Moore – especially when the two guitarists let rip – and that’s no bad thing in this reviewer’s opinion. However that’s just one strand of the band’s appeal, and tracks like Last Bearer’s Song – where everything seems to come together perfectly – prove that there’s a broad, wide-ranging appeal to the band’s sound that is hard to resist.Raise your banners high and follow the Vexillum flag! Album of the month! 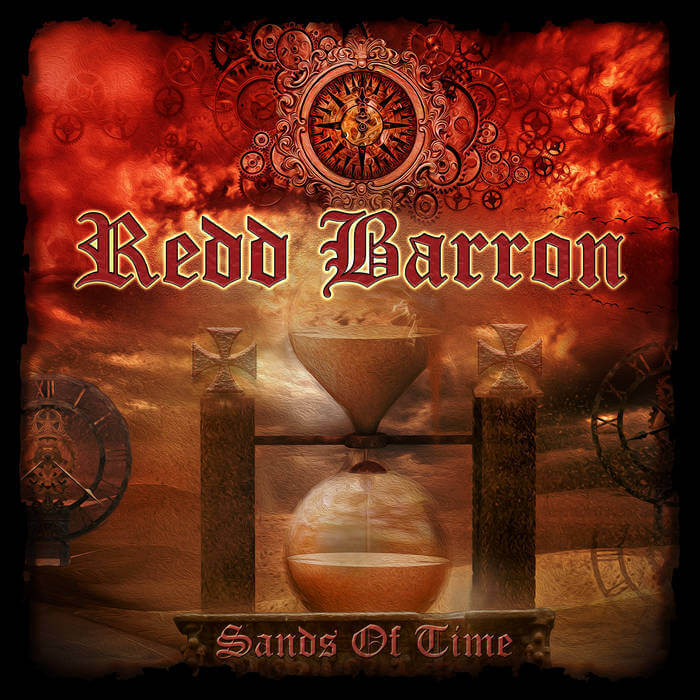 Chicago, Illinois natives Redd Barron have been on the Crusade’s radar for a couple of months now but we just haven’t been able to find a spot for them, a sorry situation that we are pleased to rectify now!

Their excellent album Sands of Time has been out for a couple of months now, and, if the classic US heavy metal of the mid-to-late eighties is your thing then you really need to familiarise yourself with this record. Tracks like opener King of the Hill and second track are The Edge are A-grade examples of the form; recorded thirty years after the fact perhaps, but no less vital or fresh-sounding for all that. Vocalist Brian Lee has a nice, relaxedly gritty approach, happy to sit in his middle ranges for most of the time – but man, can he unleash a scream when he needs to!

Of course, this is eighties-inspired metal, and so obviously Redd Barron come equipped with a redd hot guitar duo in Pete Alvarez and Greg Eichelberger, who weave in and out of one another’s playing with practiced ease and a slick eye for metallic detail. I particularly enjoyed the way the build up the intro on the excellent title track, underpinned by some nice clanking bass from Frank Masterson and great sounding drums from Rod Gardner, who gives the snare a real crack throughout.

Classic metal – no more, no less. But done so well it’s impossible to resist. 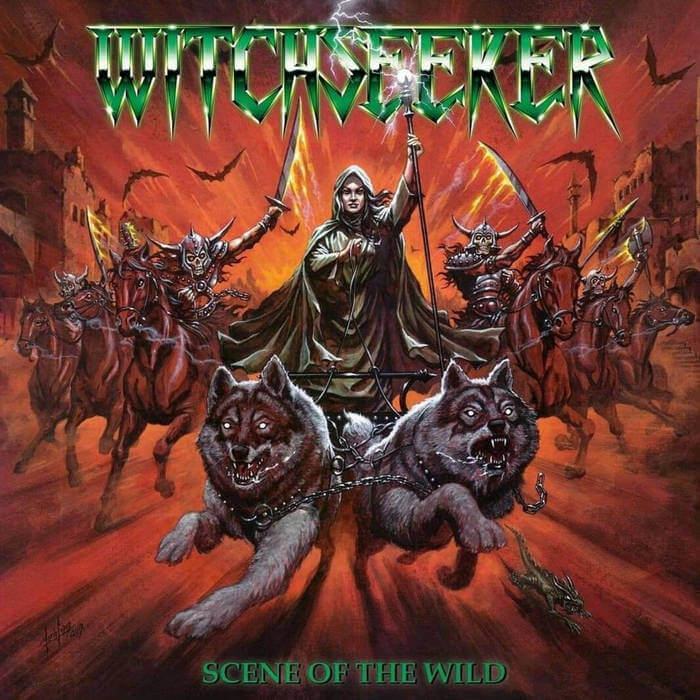 Off the beaten track a little we find Singaporean metalheads Witchseeker and their new full-length Scene of the Wild. The band aims to play ‘heavy metal like you know it – LOUD, TIMELESS AND TRUE’ and that certainly seems to be the case with this ripsnorter of an album!.

Kicking off with the title track, the band appear to be attempting to exhume the corpse of the first Mötley Crüe album, but they never hover over one particular band as an influence, preferring to career all over the eighties in their search for metallic satisfaction. Rock This Night Away has more of a NWoBHM feel to it, albeit one where the British band is trying to sound like an American one, and, naive though a lot of the material here sounds, there’s no denying the sincerity or skill with which it’s played. Brandon Speedranger and Nick Stormbringer are exuberant axe men, with an irrepressable urge to rock like hurricanes, and I have to admit that the result is bloody infectious.

Band founder Sheikh Spitfire howls away upfront, supplying rumbling basslines into the bargain spitting out the lyrics on speed metal anthem Lust For Dust with dead eyed conviction. His bulldozing bass sound on Screaming In The Moonlight is an album highlight – but there is far too much fun to be had here to single out any more tracks – just give Scene of the Wild a spin if you don’t believe me!