Welcome back to the latest Crusade! As ever there’s plenty of good stuff that I want to bring to you so we’ll keep things short and to the point – enjoy the music! 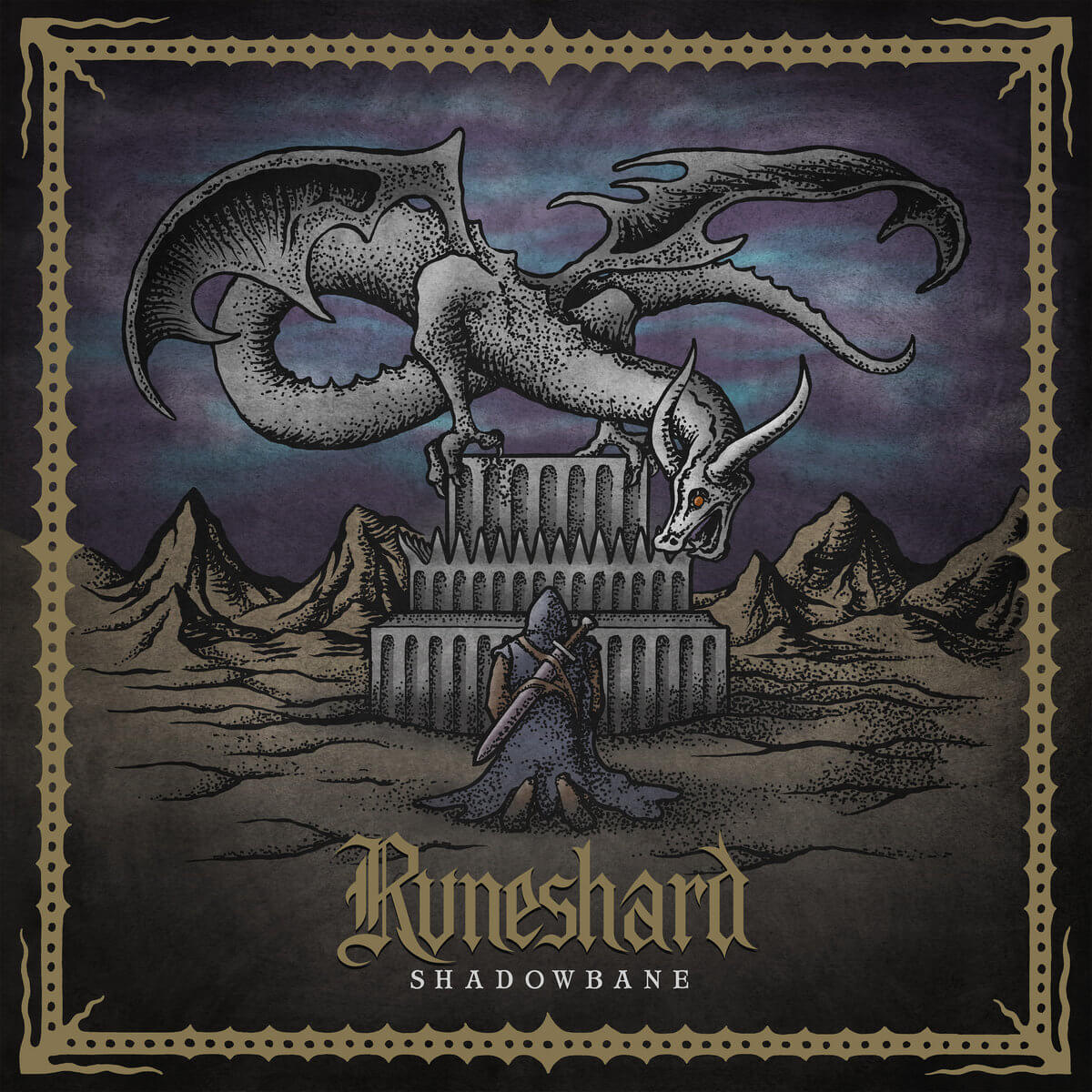 A duo from Hungary, Runeshard offer up a beguiling mixture of symphonic, power and black metal styles; their newest release, Shadowbane, contains five tracks of superbly executed theatricality that will certainly have fans of long-lost Brit metallers Bal-Sagoth banging their heads in approval.

In fact only Sagoth’s prediliction for novella-length song titles is missing here, although opening track Heralds of the Thurian Age certainly offers up the same sort of flavour; Vocalist Henry Mathy also adds some very dramatic spoken narrations to the mix, adding to the delirious feeling of kitchen sink overkill already heightened by the demonically dank, cadaverous rasp he utilises for the most part. The band’s other member, Bálint Kemény, adds guitars and keys; his guitar playing is a mixture of concise, hard hitting riffage and slick, surgically-precise soloing where notes are never wasted. The flamboyance here comes courtesy of the keyboard orchestrations, which are never less than florid and often positively baroque!

At only thirty two minutes in duration Shadowbane is in no danger of causing listeners ear fatigue, and the album as a whole is a hugely enjoyable slice of over-the-top, bombastic heavy metal. It’s available from the band’s Bandcamp page as a ‘Name Your Price’ release, so there’s no excuse for not having a listen for yourself! 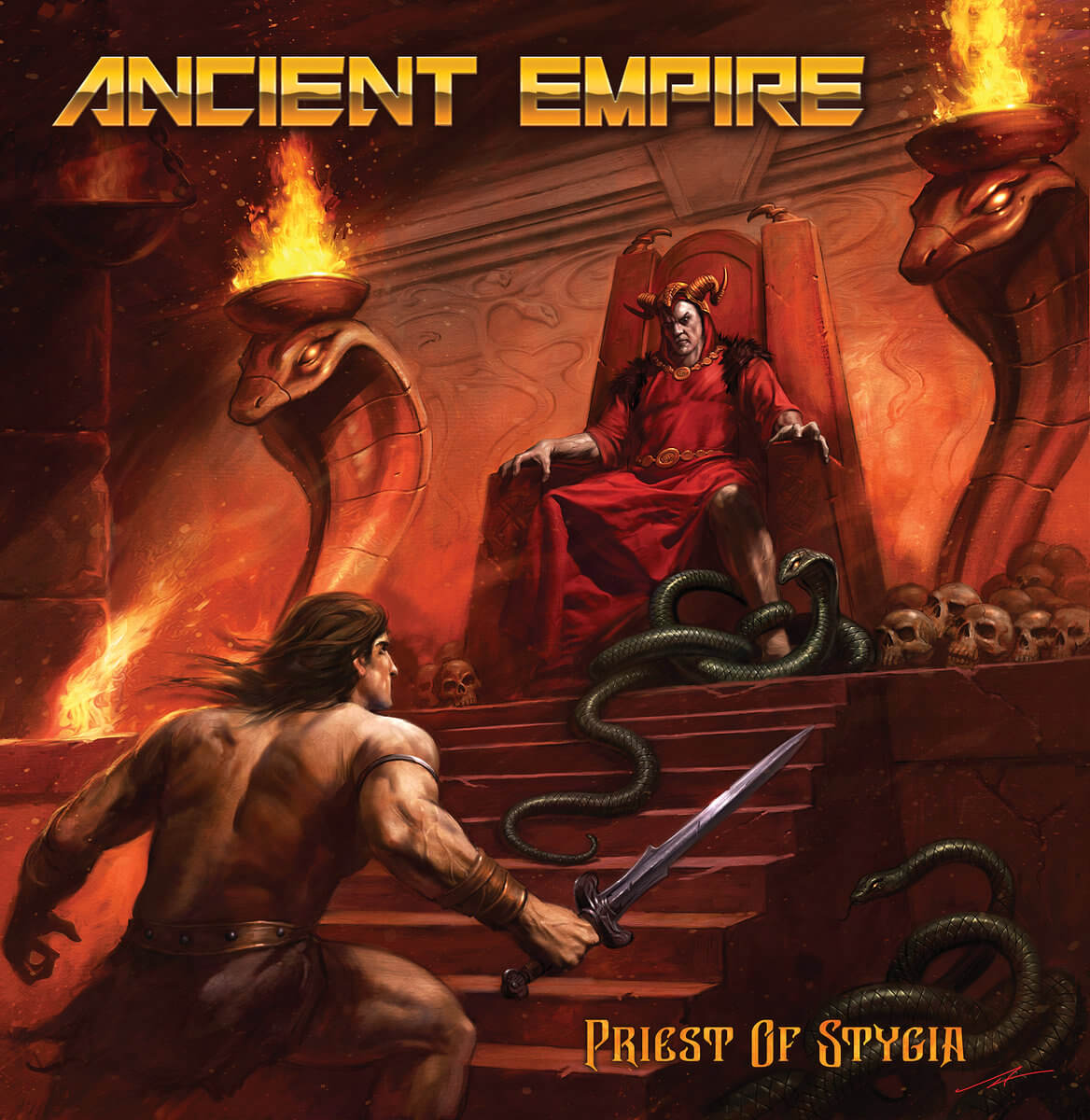 Californians Ancient Empire last graced the Crusade in 2018 with their excellent Eternal Soldier elpee, an album I described as perfectly showcasing ‘American power metal done right’.
Well, they are back in 2021 with a new album, Priest of Stygia, and I’m pleased to report that not much has changed in the AE Camp.

Actually that’s not entirely true, because in fact Ancient Empire 2021 is an even sleeker, more powerful beast than before, and Priest... is easily slotting into my list of the top power metal releases of 2021.

Last time around I mentioned names like Leatherwolf and (especially) Savatage, and those names are augmented here by a dose of melodic metal in the vein of W.A.S.P. in their eighties pomp and the late eighties grandeur of Iron Maiden… Seriously, it’s hard to explain just how good tracks like this album’s title track sound to the metal ear… this is nigh on perfect traditional heavy metal that deserves to be heard by the largest audience possible not least because in Joe Liszt the band has one of the best pure metal voices doing the rounds currently.

He’s no slouch on the guitar either, either as an inspired lead player or crunchy rhythm purveyor, and his performance all over this record in all his varied roles must make him an absolute MVP if ever there was one. Just have a listen to the grandiose majesty of Island of The King if you don’t believe me.

Talking about belief, it’s hard to believe that this band isn’t massive right now, but hopefully this album will help them make strides in the right direction sooner rather than later. Once again, I have no hesitation in making Ancient Empire the Crusade’s release of the month!

Rage In My Eyes 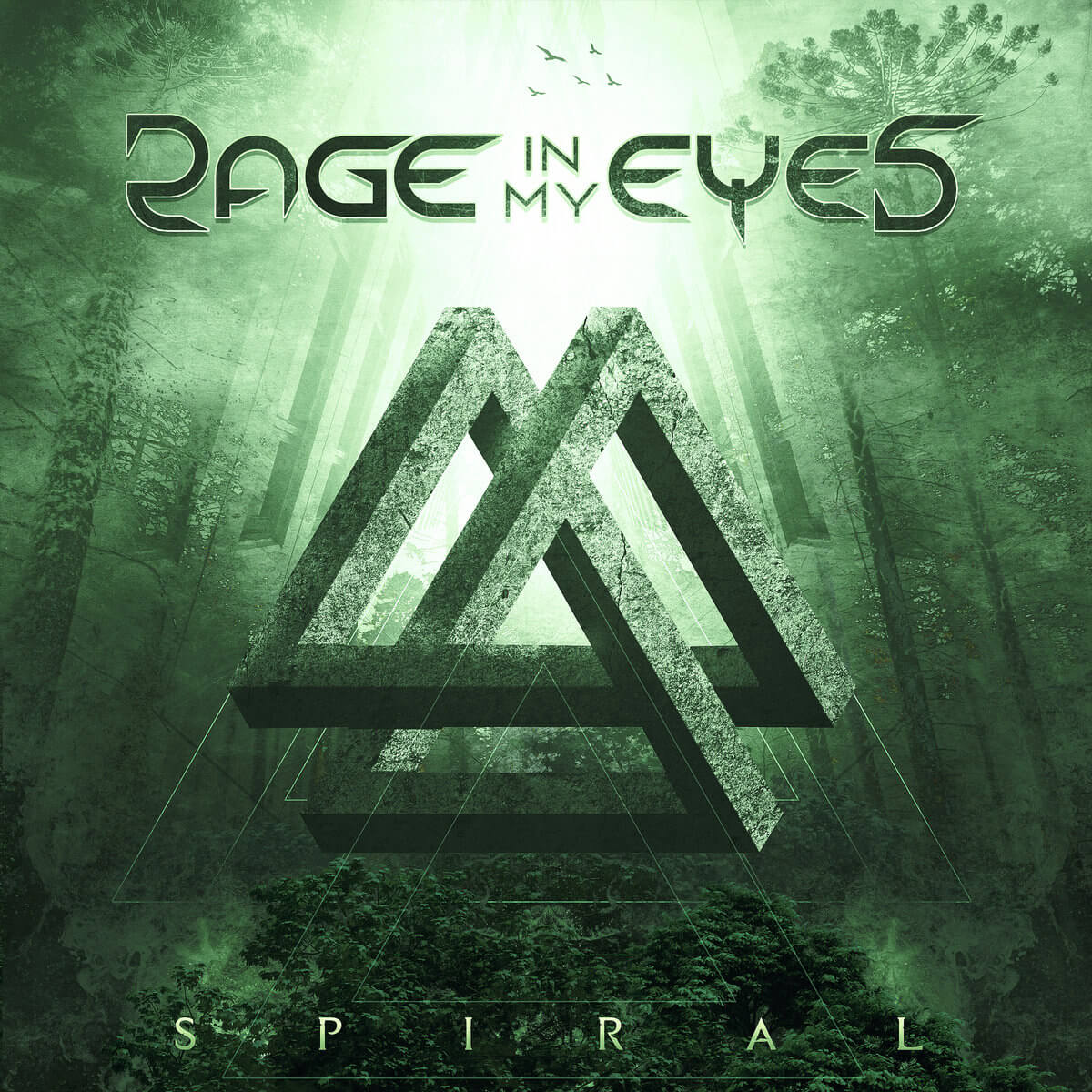 Staying on a power metal tip we head to Brazil and Rage In My Eyes, who are shortly to release a new, five track EP entitled Spiral…

Whereas Ancient Empire are definitely very much of the line of the great American power metal Gods, RIME look to the old World for their inspiration, and on songs like And Then Came The Storm they whip up a sound not a million miles away from Blind Guardian or Gamma Ray. Jonathas Pozo leads from the front with a fine, impassioned vocal performance, but the rest of the band aren’t far behind; Bassist Pedro Fauth is nicely upfront in the mix and does not let his time in the spotlight go to waste, whilst Leo Nunes and Magnus Wichmann mesh together seamlessly to provide real heft in the guitar department.

Highlight of the release is the superb Dare to Defy, which weaves in a whole host of disparate metal strands to create a fabulous finished product that absolutely oozes class and a steely self-assurance that should take the band a long way. Recorded in times of great personal stress by the band during the Pandemic, Spiral shows a band that has an abundance of spirit to go with their undoubted talent and ear for a catchy metal tune. It’s well worth a listen – you know what to do!

Rise To The Sky 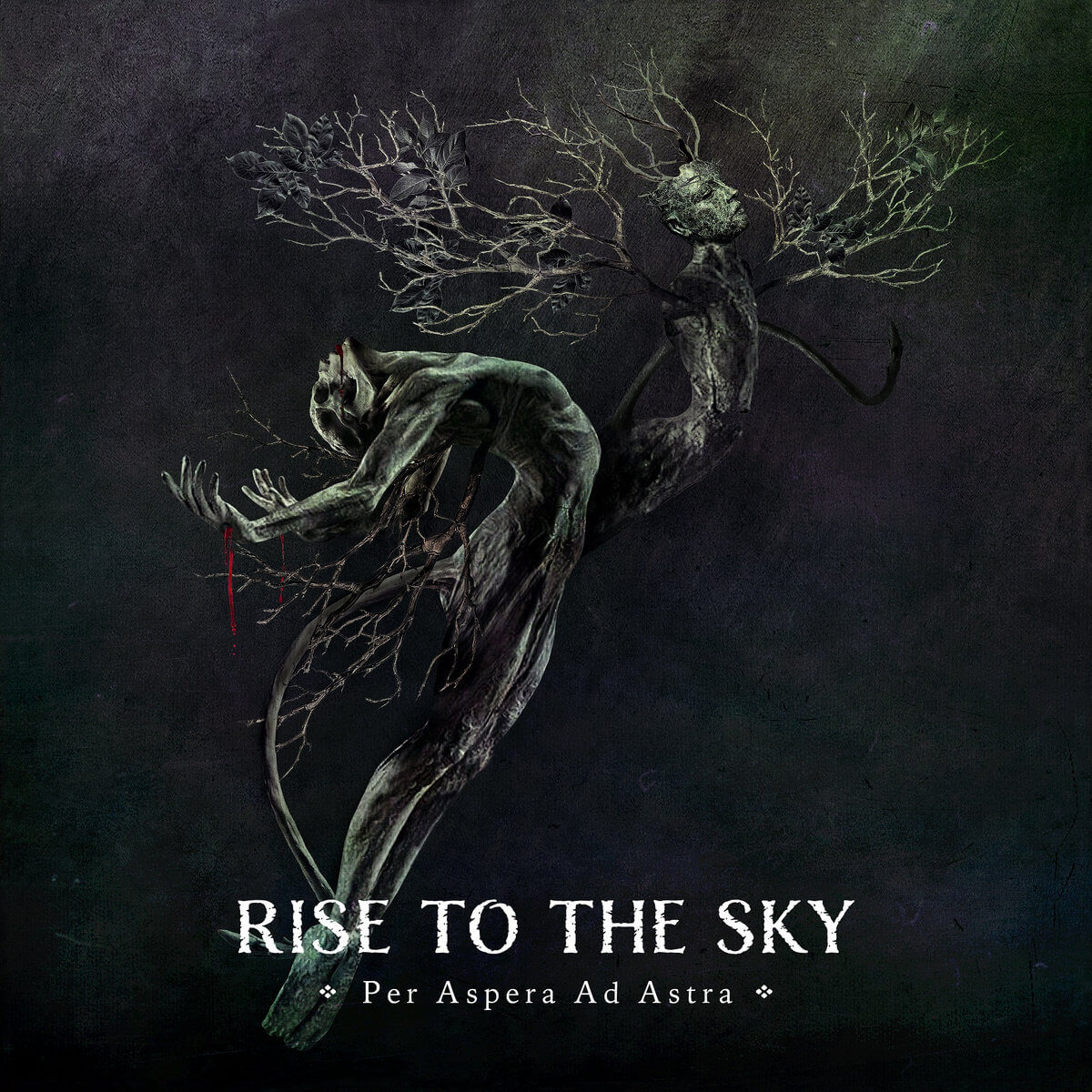 Slowing things down – not to mention heavying them up, considerably – is Chilean one-man band Rise To The Sky. Per Aspera Ad Astra is the name of the project’s new offering, and if you’ve ever absorbed and admired the early works of bands like Anathema, My Dying Bride and Paradise Lost then there’s a fair chance you’ll be interested in this release too.

It’s an incredibly affecting release, doubly moving after you learn that the project’s prime mover, Sergio Gonzales, wrote the album’s title track almost immediately after the burial of his father, who died suddenly earlier this year. Elsewhere tracks like The Loss Of Hope crush the listener to the very core with a black rain of gloom that hangs like a pall over everything it touches. And yet, at the same time, Gonzales’ impassioned, wounded roar has an almost intangible glint of hope, or at least redemption, within it that acts as a strangely uplifting counterpoint to the overbearing air of hopelessness.

The best doom/death always seems to purvey that juxtaposition of tattered hope and doomed expectation, often wordlessly, relying on the sheer heaviness of it’s simple riff frameworks and plaintive lead guitar lines to ram home not a message but a less concrete spirit; and here, Rise To The Sky does just that with a terrible, stark beauty. Like the road accident you can’t look away from, you’ll find yourself returning to this album again and again, wallowing in the strings of the title track and letting their glimpse of redemption recharge your soul. If your heart is black, Rise To The Sky is the music your spirit has been yearning for.

Well, that’s it for another month – I sincerely hope you’ve enjoyed some of the music we’ve found for you in this edition of the Crusade.

Until next time – stay safe