Trouble: Hammerheart Set To Reissue Four Classics From the Band…

Trouble: Hammerheart Set To Reissue Four Classics From the Band…

To this day, US metal legends Trouble remain essentially impossible to pigeonhole, their work sprawling across almost the entire heavy metal landscape at one time or another; If you’ve never heard this most enigmatic of bands, or you’ve forgotten just how apocalyptically good they could be on their day, then you’re in luck, as Dutch label Hammerheart Records have announced plans to reissue four of the band’s key releases later this year… 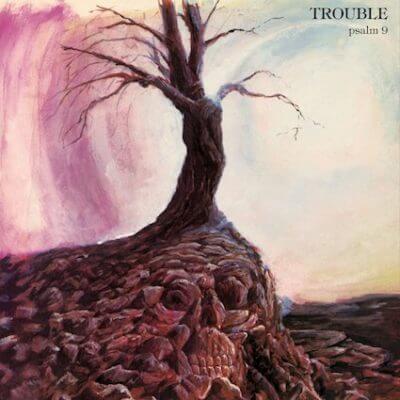 Trouble’s early work and, in particular, Psalm 9 represent everything that doom metal should be (but so often is not). Think about it, here is a band who are really rather diverse, with regard to tempo, arrangements and mood, and are not afraid to break the mould of what is typically expected of a doom band. For 1984 this is an incredibly contemporary-sounding record; it’s doom to the bone, but also thrashy and featuring some, for the time, modern heavy metal touches. At its heart there’s nothing regressive or throw-backy about this record. Honestly, it makes one laugh when stuff like this is called ‘traditional doom metal’; what is traditional about it? Bands like Trouble and Candlemass weren’t operating in an established tradition, they were forging their own sound.

Too often one hears doom bands who really take the metal out of doom. Doom nowadays often seems to be a byword for “play slow, minimise your metallic leanings”. Of course, Psalm 9 answers to one’s prayers as it has lead guitar and fast parts in abundance. Contrast is key to its success and every stomping, down-trodden riff is offset by a fast break. Trouble love playing slow, but damn, they’ll rip your face off, too!

That’s really what’s so great about Trouble; they’re never content to stand still, the music is constantly going somewhere. They’re throwing out riffs left, right and centre and still writing cohesive, memorable songs. Eric Wagner’s ‘king of the harpies’ vocals, the Priest-gone-doom guitar delivery and that staggering rhythm section. You can tell that this is a band who have just been locked-up in a rehearsal room for years, playing to the walls, with minimal contact with the outside world. How else could have Trouble perfected a sound that’s so unique, so tight and so monstrously heavy? It’s ominous like a stormy sky and really it just does feel like a force of nature.

Still, to this day, you will have not heard many ‘traditional metal’ records that are as blisteringly heavy as this; like a ghost train hammering down on its way to hell, Trouble are just an unstoppable force on this record. That guitar sound, those thunderous drums, some of the best tracks in all of metal and Eric Wagner giving what is certainly one of the most commanding vocal performances one has ever heard. For 1984 this was only second to Don’t Break the Oath in many minds, and Trouble have more in common musically with Mercyful Fate than what people these days consider doom metal. 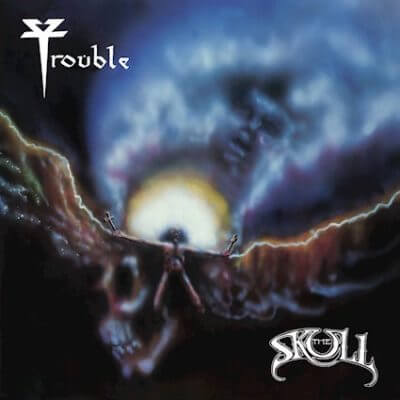 Trouble’s second album The Skull from 1985 is a cornerstone of doom metal!

The Skull is not a sophomore slump, it is the shedding of dead skin. In fact, the sophomore slump is a disease that rarely seems to strike in the metal realm and was near non-existent for any half decent early eighties metal band. As bands were being picked up relatively quickly by labels during that time the overall trend was for bands to evolve to a heightened plane as they honed their skills over two or three releases. This is exactly the case here where Trouble emerged from a NWoBHM/thrash/doom cocoon, blossoming in the process into a soul destroying depressive machine. Now do not get us wrong, we love every second of Psalm 9 and will stuff that down your throat too. But this album is a cornerstone of doom metal.

To dispel any fears right now we must look at the fact Trouble had written songs like Gideon, Wickedness of Man and The Wish before Psalm 9 had even been released. Not only that, but the incredible guitar tone and Eric’s vocals have improved since the legendary debut even if that seems impossible to do. The lyrics are about Christian morality spiced with dark themes. And they come across as an ingenious doom metal ploy – instead of preachy songs, they appear more like depressing stories of death and hopeless salvation, If you are not struck down by the impact of Eric Wagner’s grief when singing the opening of Pray For The Dead you will never know true doom.

Pray for the Dead, Fear No Evil and especially The Wish are an incredible opening force. This is doom metal, in all it’s glory. The touches of NWoBHM and thrash are still there, but the tempo drops most of the time and the guitar tone is something that other bands of the period would never come close to achieving. There are neoclassical touches and harmonised leads which really bring about the desponding atmosphere, and Eric Wagner’s vocals are hands down some of the best in metal. The Truth Is, What Is has a fantastic chorus despite being a mash of riffs and continues the high trend. Surprisingly it’s the next two pre-Psalm 9 tracks which seem a bit different, but the riffs on display still slaughter most doom and NWoBHM from around this period. Finally, just when you think they couldn’t really top the power of the opening tracks comes the incredibly ominous The Skull. Once again the riffs here are inventive, memorable and shining with brilliance; the mind boggles that this release hasn’t been praised more.

Save yourself, get this album! 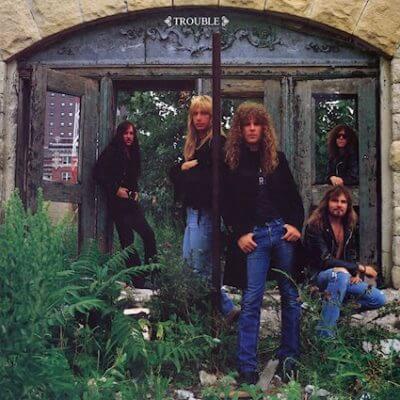 An absolute classic: the legendary album from 1990 and the pinnacle of Trouble’s impressive career. Heavy metal was never better than this! Finally re-issued!

Trouble’s debut album did great things for metal and remains one of the darkest, thrashiest doom albums to date. A lot of things can change in six years, especially when you’re talking metal and the dates are 1984 and 1990. The decade may have changed them, but not in a way that suggests decay or a decline in the quality of their resolve or their skill as musicians and performers. On the contrary, Trouble’s 1990 self-titled release is arguably their most mature, boasting a fleshed out sound with unparalleled song writing, a great production, and the time-crafted vocals of Eric Wagner which had improved majorly in the years since their previous efforts. All of this culminates in what is to our mind the most “complete” thing Trouble ever created.

From the mid-paced chug of a killer opener in the shape of At the End of My Daze to the last notes of All Is Forgiven, you won’t hear filler or anything resembling a weak link. The riffs here are some of the best ever written, by Trouble or anyone else; every song has a manically awesome main riff that demands a display of headbanging. Riffs are undoubtedly the point of focus here; they make the songs, and they’re a timeless variety of greatness. Also, the interplay between guitarists Bruce Franklin and Rick Wartell is some of the best lead work you will ever hear in metal.

Trouble basically reinvented themselves with this release, and while I think it was a fantastic rebirth, those who aren’t so keen on the laid back stoner vibe they chose to adopt may not see it as a rejuvenation, but a step back (they did go from doom and gloom to collectively embracing their inner acid dropping free love hippie, after all). But the metal remained fully intact!

And as I’ve said, I think this is Trouble at their best. This is originality and innovation at its best, it is supreme quality. A leader of bands paves the way and then steps aside to create something that will serve as an example of how to improve upon an established formula: that is, by doing it really damn well. 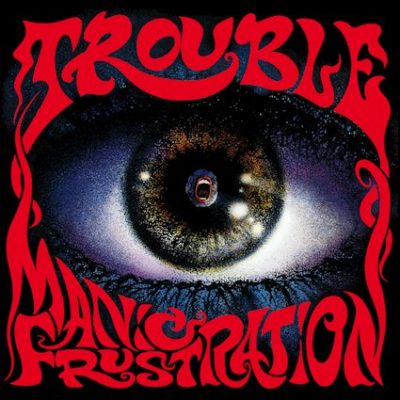 Manic Frustration immediately takes you to a dreamscape of vintage metal reverie, with its razor-sharp guitar tones and muscular, crisp production!

At their peak, Trouble were the perfect combination of Black Sabbath meets The Beatles, and their 1992 album Manic Frustration was their collaborative pinnacle. Perhaps a case of divine intervention from the feedback gods; the doom pioneers jumped from their record label, Metal Blade to Rick Rubin’s American Recordings shortly after Slayer had. While Trouble never reached the commercial heights of the thrash kings – they were, in their own way, just as important.

Manic Frustration pulls you into a time warp of seventies metal bliss, with its razor-sharp guitar tones and muscular, crisp production, courtesy of Rick Rubin (System Of A Down, Johnny Cash), himself. The way the players bounce off of each other is a rare example of lightning in a bottle, and Rubin is just there to document it all, in his typically stripped back fashion.

The album kicks off with the scintillating restraint of Come Touch The Sky. It’s clear from the first few seconds of Rick Wartell and Bruce Franklin’s opening riffs that this is all about the song writing. The one-two punch of ‘Scuse Me and The Sleeper follow suit and kick the album into high gear. It’s only on the fourth track Fear where Manic Frustration casts its true spell, expanding its sound and revealing its layered flourishes, as the band progressively steps up their game from each proceeding track.

The production on Manic Frustration elevates the album to the status of an unsung classic.

Its songwriting laid out bare, sticking to its guns of old school Hendrix-like rock ‘n roll, with touches of psychedelia and Beatles-esque pop. Manic Frustration never chases any of the trends that were popular around ‘92, but instead remains more enamoured with the past. Tragedy Man avoids all the trappings that make many similar songs today sound dated.

The main centerpiece of the album, Memories Garden, is one of metal’s great melodic moments, along with the cocaine anthem Mr. White. If singer Eric Wagner’s banshee-like vocals take on more of a pop sensibility, then it’s really on the album’s closer Breathe, where he cleanses his demons, with all things closing on both a grandiose and surprising note.