Put three legendary bands on a bill together and you’re guaranteed an epic night of tunes! Billed as The Farewell Tour, thousands of fans turned out to see David Coverdale‘s Whitesnake, joined by US hitmakers Foreigner and Sweden’s finest, Europe at the OVO Hydro in Glasgow.

Striding on stage in his signature WS branded shirt, Coverdale and his stellar band were warmly welcomed in Glasgow as they kicked off with Bad Boys, Slide It In and the brilliant Love Ain’t No Stranger. At seventy years of age Coverdale’s voice is not what it once was, but he’s still as charismatic as ever and has assembled a phenomenal band who really helped to propel the show.

New boy, the hugely talented Dino Jelusick helped with some of the heavy lifting vocally from behind his keyboard, whilst guitarists Joel Hoekstra (Cher, Night Ranger) and Reb Beach (Winger) were both outstanding, delivering fantastic riffs, licks and solos throughout the (still of the!) night. Another new addition, bassist Tanya O’ Callaghan, was tremendous too. Her dreadlocks flying, the Irish rocker brought groove to the songs and added classy backing vocals.

As the set drew towards its close with Here I Go Again, Crying In The Rain and the monstrous Still Of The Night, there was a sense of sadness as the Glasgow audience experienced the end of an era, and waved farewell to a band who are certainly hard rock legends of their time.

In contrast, US rockers Foreigner are showing no signs of slowing down. They took to the stage earlier in the night to perform a hit-packed set with the stage production of a headline act. I last saw the band at the Ramblin Man Fair in 2019 and it’s clear they are as polished, energetic and impressive as ever.

Frontman Kelly Hansen delivered astounding vocals on a set of songs that are incredibly tough to sing. He also showed he knows what love is (!) in a wonderful moment when he surprised his wife Anna by presenting her with flowers onstage to celebrate their wedding anniversary – aww! He was soon rockin’ again, venturing in to the photography pit and high five’ing fans.

An epic performance of Urgent was a highlight. There was sadly no iconic saxophone, but Michael Bluestein stepped forward with an excellent keytar solo instead, which the crowd just loved.

Double Vision, Cold As Ice, Feels Like The First Time and Jukebox Hero all flew by before the band welcomed founder and songwriter, Mick Jones on stage. It was heartwarming to see and hear the crowd’s appreciation for the man who created the band and wrote the iconic songs we still love today. On stage for the encore of Long Long Way From Home, I Want To Know What Love Is and Hot Blooded, Jones helped to close a fantastic set that I didn’t want to end.

Due to traffic and an early start time, I missed the first couple of songs from openers, Europe (the nature of travelling over three hours for a gig!). However, Joey Tempest and the band sounded mighty fine as they always do. The band have been making great rock music for decades and their heavy, Deep Purple-tinged sound went down a treat in the Hydro. Their punchy set showed that there’s more to the band than just ‘that song’. Rounding off with a knockout trio of Superstitious, Cherokee and The Final Countdown, guitarist John Norum‘s Gary Mooreesque fiery playing shook the arena walls.

This was a night of legends, reminding us of the truly staggering number of classic songs they have created over more than forty years. For David Coverdale it’s the end of the touring road and we wish him well. For Foreigner and Europe the journey goes on. Wonderful. 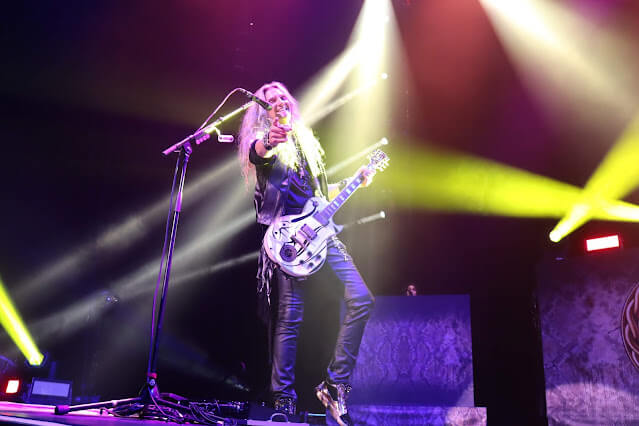 Madz‘ review and pics originally appeared on her splendidly-named site, Denim & Blether – go HERE for more from her!

About the Author: Madz Lenthall