No disrespect to Lord David Coverdale – the man’s place in cock rock history is assured, of that there is no doubt, but anyone who has seen the man in live action over the last couple of years would surely agree that the man’s time is at hand, and he should bow out of heavy rock gracefully.

Leaving the field open, theoretically, for a takeover from new ‘kids’ on the bluesy hard rock block Sainted Sinners. The word ‘kids’ is of course in inverted commas because the men behind this album are men of immense expeience as opposed to wet-behind-the-ears whelps of little or no vintage. Formed around the dynamic duo of former Accept/Bangalore Choir throat David Reece and the keyboard talents of Axel Rudi Pell sideman Ferdy Doernburg, Sainted Sinners have come up with a debut album that, though a long way from perfect will certainly have Whitesnake fans of all eras salivating at what’s being served up.

Best track in this respect is the cheekily-titled Maybe She’s Got Balls, a slinky, funk rock workout that might easily have been left off of Saints an’ Sinners in a parallel dimension; Reece doesn’t quite have the breadth of expression and lascivious look in his eye of a prime time Cov, but he’s close enough, and Doernburg is frankly pyrotechnic on the ivories. This pair are augmented by the undoubted skills of guitar playing Bonfire alumnus Frank Pané (who actually brought the whole project together with his vision for a band that would encapsulate the ‘pure essence of rock n’roll’) who is a one man guitar arsenal of no little talent in his own right; The resultant noise is glorious, and I guarantee you’ll love it if you’ve ever had even the slightest regard for the music of Coverdale and Jon Lord.

Closing track Truth is a Lie is a languorous, epic piece of hard rock perfection too, whilst the smokey, late-night bump n’grind of Do You will have those taste buds in your ears – the ones designed to act as pleasure receptors for anything even a little Zeppelinesque – twitching like crazy as the rifferama unfolds.

I could go on, but you’ve got the picture, right? It’s always a pleasure to hear musicians who have mastered their trade in action, even more of a treat when the music they happen to be making happens to be right up your alley. Sainted Sinners have unleashed a monster here, and I can’t recommend it highly enough. 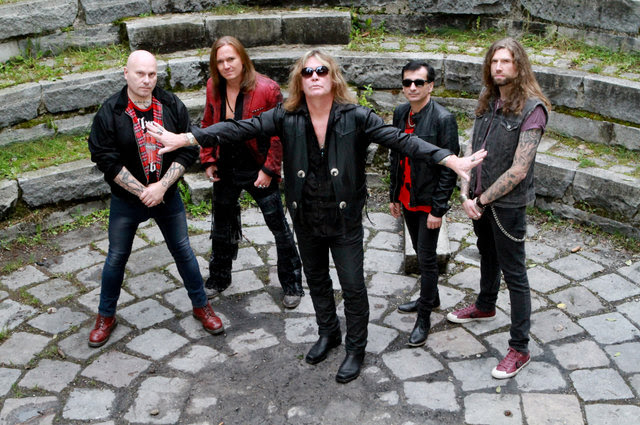 Sainted Sinners will be released by El Puerto Records on February 24th. You know what to do.